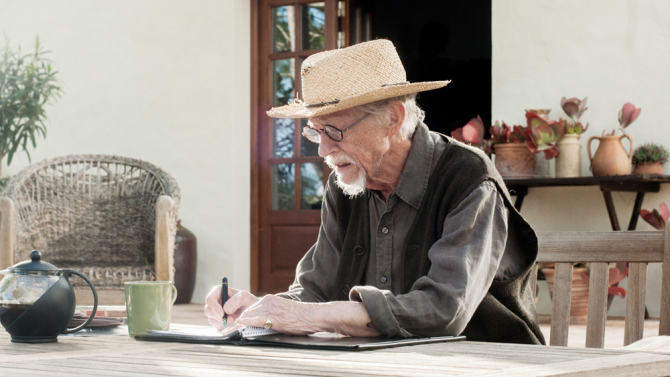 At 76 years of age actor John Hurt is still going strong having just completed,’THAT GOOD NIGHT’, following a 31-day shoot, with the unveiling of the first official film photo as seen here.

As was recently announced, THAT GOOD NIGHT also stars the veteran British actor Charles Dance, in the role of the elusive Visitor opposite Hurt. Rounding out the cast is Sofia Helin (THE BRIDGE), Erin Richards (GOTHAM, THE QUIET ONES,), Max Brown (AGENT CARTER, BEAUTY AND THE BEAST), Noah Jupe (THE NIGHT MANAGER) and Joana Santos (LACOS DE SANGUE, MAR SOLGADO).

The film has shot for just over five weeks on the Algarve coastline of Portugal, primarily in Monte Seco, as well as Tavira, Praia dos Olhos de Agua and the region around capital city, Faro, with the support of the Loule Film Office and Algarve Film Commission.

Release date to be confirmed and we’ll bring you the trailer as soon as we have it.