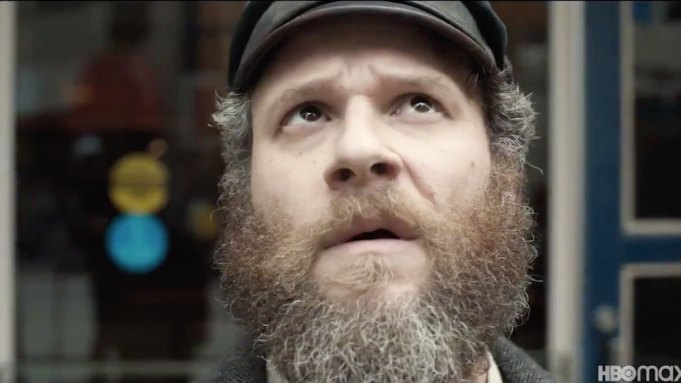 When you’re the leader of the USA facing inquires into possible tax fraud and even your own party hate you as you’re about to go into an election you know you’re in an American pickle – yes it’s another laboured link to this week’s film. An American Pickle is based on a short story by Simon Rich, a Saturday Night Live writer and here he adapts the book into a screenplay which he adapts where Seth Rogen is Herschel Greenbaum a Russian Jew in 1919 whose wedding ends with nearly everyone slaughtered, much like most weddings except here it’s not by alcohol but by sword wielding Cossack’s. Escaping to the US with his wife he finds a job as rat catcher at a Brooklyn pickle factory where he falls into a vat of brine just as the factory is shut down having been condemned.

Trapped in the brine he’s rediscovered 100 years later in a very different America and unusually there  are no quips made about Trump which after Rogen’s recent turn in ‘Long Shot’  seems a missed opportunity. But An American Pickle is more of a fish out of water / time travel film when Herschel, having been informed that his wife is long dead,  is introduced to Ben Greenbaum a long lost relative and bearing a striking similarity to Herschel primarily because Seth Rogen plays both roles and really the only difference is that Herschel has a beard and a comic Russian accent. Ben is an app designer having spent five years on his latest which will make him a fortune but when investors pull out due to a fight that he and Hershel instigate and get arrested he finds himself back at square one.

As might be expected from the title it’s Herschel who hits on the idea of making pickles primarily because he wants to buy and chop down an advertising board with a poster for vodka near to his wife’s grave. Convinced that the vodka has been made by Cossacks he determines to earn enough to by starting his own pickle business. It’s here that the film is best taking pot shots at the crowd who will buy anything if they thinks its artisan and here Herschel has pickled old cucumbers in dirty jars of salt water – think Ron Jeremy in a floatation tank and you get the idea.The American pickle is also the mess Herschel finds himself in when he expands his business using twitter with the sort of tweets that everyone except Donald Trump would take offence at and its made worse for him when Ben, annoyed that the finance for his app has been scuppered due to the fight that Hershel started, starts involving authorities.

An American Pickle is a small scale film and ultimately is just a two hander with both roles played by Seth Rogen whose schtick is usually stoner comedy but his best films have not focussed on that (The Disaster Artist being a great film). Though this is a fish out water comedy the stoner stuff is completely absent which is no bad thing. This is one of those rare comedy films insofar as there are no real laugh out loud moments and perhaps its best moments are pointed jibes at the power of social media and how people take offence at anything so desperate are they to appear woke. Based on a short story the film runs at only 90 minutes but even that feels overlong in the directorial  debut of Brandon Trost a cinematographer with an extensive career on several of Seth Rogen’s films and though there are good moments they are far too occasional for a comedy.

Here’s the trailer for An American Pickle…….