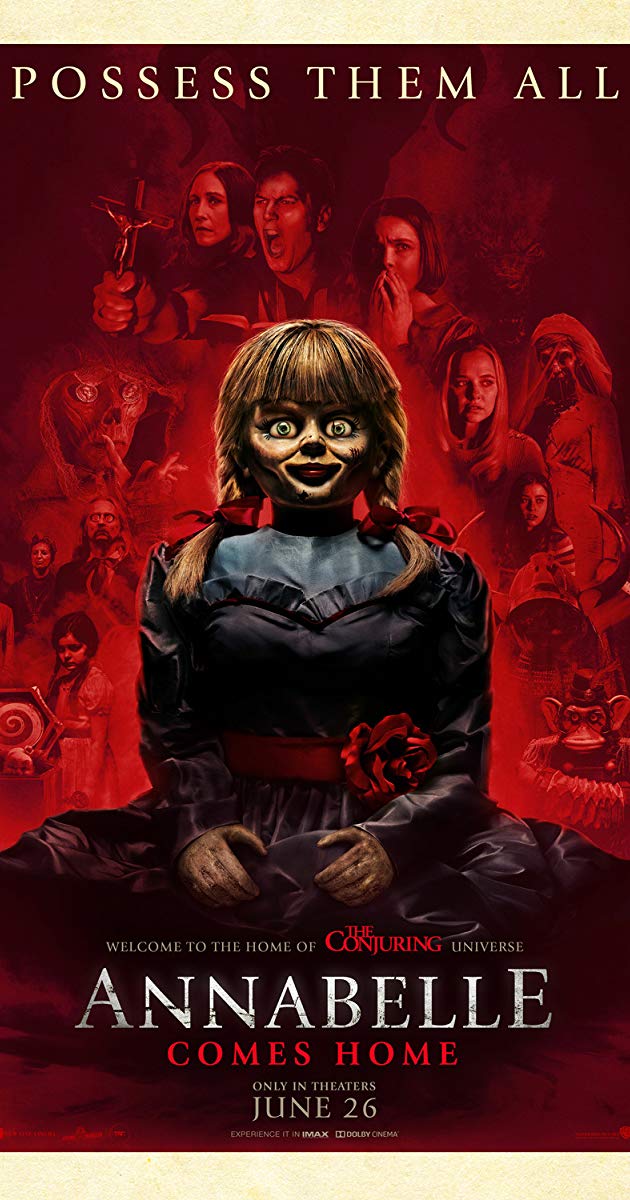 So James Wan’s Conjuring Universe rumbles on with a third installment of the demonic doll and Annabelle Comes Home begins with parapsychologists Ed & Lorraine Warren taking the manky make- up wearing, vacant eyed, botoxed bint and putting her back where she came from……between Simon Cowell and Alicia Dixon on the Britain’s Got Talent judging panel. As it turns out  this is set in the early seventies as seen with the fashion and décor and Annabelle Comes Home to the Warren’s Basement of Bad where she’s blessed by a priest and locked in cabinet of church  window glass. 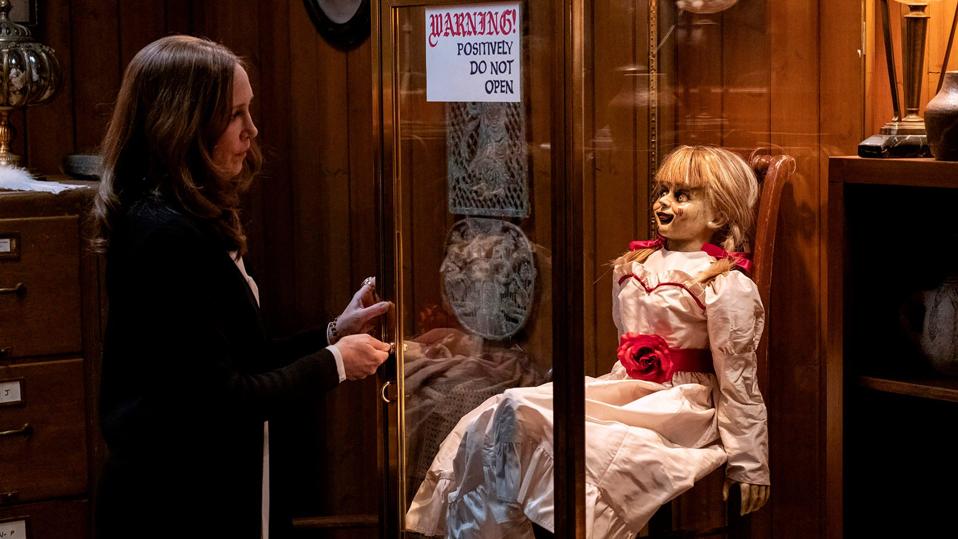 For the first time we find the Warren’s at home with their only child Judy (Mckenna Grace) who through no fault of her own is a ostracized by her school chums because of her parents reputation of dealing with demons. It’s made all the more sad that it’s her birthday soon yet no parents are going to let their kids go to the Warren’s wacky house of weird for a party. So whilst her parents go away on another ghostbusting jaunt she’s left with her babysitter  Mary Ellen (Madison Iseman) a blonde sweet natured teenager who has a bit of a crush on a fellow student Bob, who we later find out has the nickname Bob’s got Balls which is nowhere near as exciting as you might hope, and is played by Michael Cimino who is not The Deer Hunter director solely because he died some years ago.

It’s Mary Ellen’s friend Daniela (Katie Sarife) who sets the ball of bedlam rolling when she coerces Grace into letting her into the house as she’s wants to see all the Godless gifts locked in the basement. It’s when her back story about blaming herself for her father’s death that instigates the plot as she wants to see if the Warren’s basement can help her contact her father again. What could possibly go wrong? Well to no one’s surprise, everything. 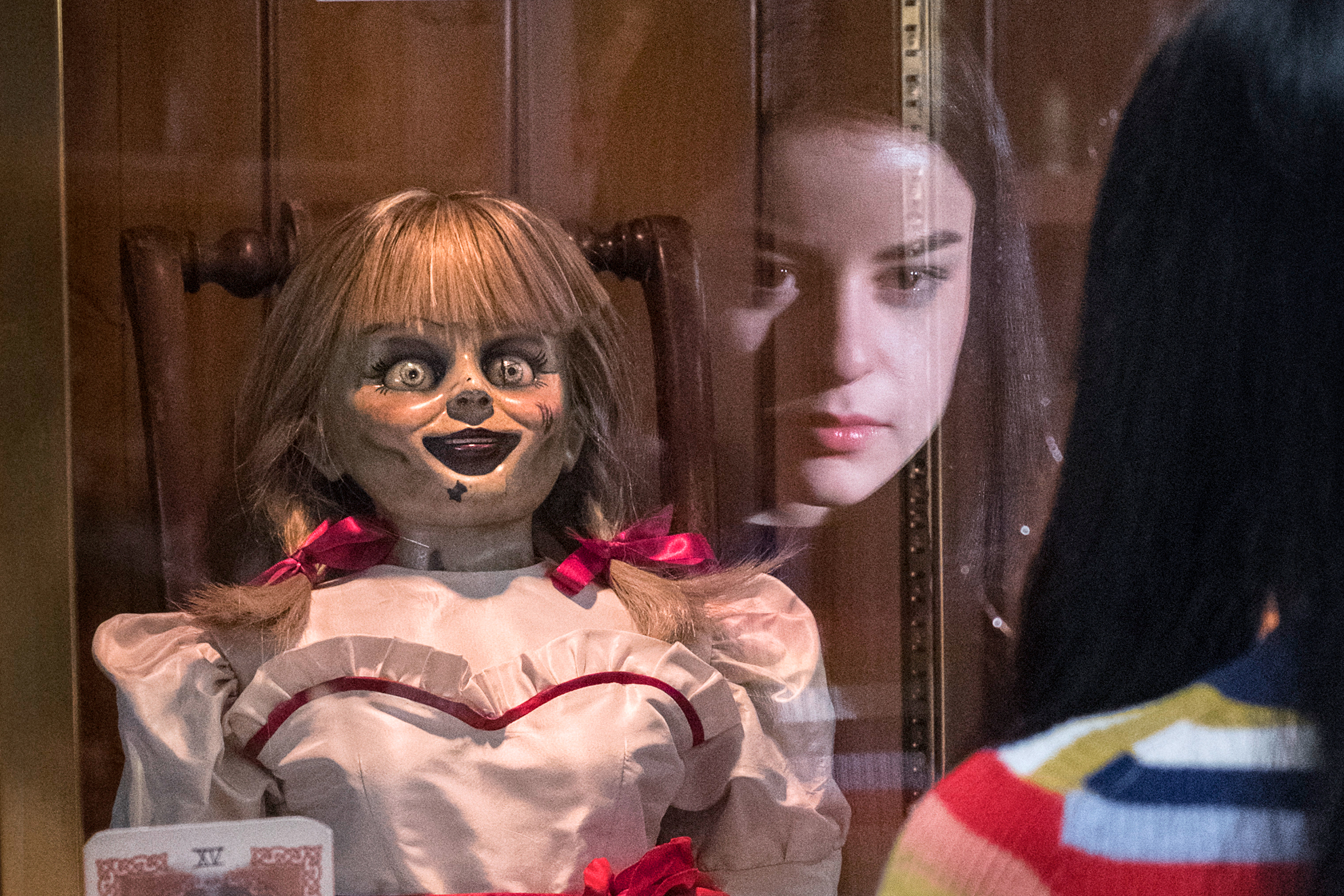 Written By  whose writing credits include IT and its upcoming sequel as well as The Nun and here he gets his chance to make his directorial debut and he’s done a decent enough job here with the influence of James Wan apparent throughout.  Including the title  Annabelle Comes Home this is very much another #Times Up bit of casting with the three main roles  (four if you include the doll) being female which is no bad thing but this follows the horror tropes of females in peril. In fact Annabelle is largely absent for much of the second act with her malevolent presence insinuated and the film wisely steps back from seeing the doll move of its own accord as seen in the second film.

Though Dauberman clearly loves his dry ice which pops up everywhere he spends a lot of time setting this all up and it’s probably too long but when it does get going in the third act it’s pretty much back to back set pieces several of which are extremely effective and guaranteed to leave you with the occasional shiver. As part of a larger franchise (we had Curse of La Llorona recently) the film also tries to crowbar in a few other monsters in attempt to generate a spin-off of a spin-off and here we have the Hellhound as well as several others though nothing is as horrific as an old LP cover seen lying around the house by Badfinger called Straight Up which would suggest that Harvey Weinstein was frequenting the set. Though it takes a while to get going Annabelle comes Home is a  good old fashioned haunted house horror hit

The Shape of Water – FINAL TRAILER