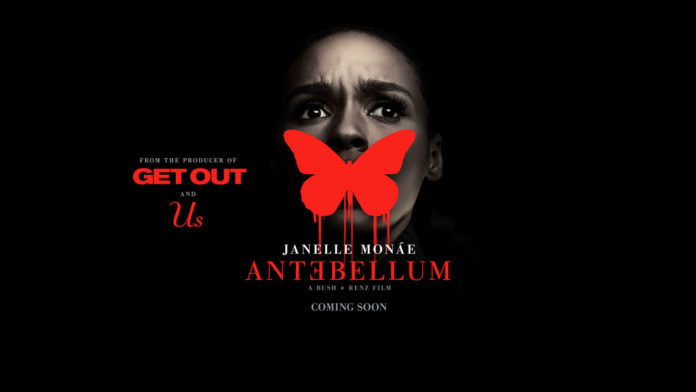 So the covid-19 lock down continues and we sincerely hope that everyone is staying home to save lives to help our heroes in the NHS. So whilst the pandemic continues to have a massive impact on the film industry which we outlined HERE we still have trailers for what look like some great films to look forward to. Landing in our inbox is the Antebellum trailer and is the writing and directorial debut from Gerard Bush and Christopher Renz’s.

The story follows a successful author (Janelle Monae) who finds herself trapped in a horrifying reality and must uncover the mind-bending mystery before it’s too late.

The Antbellum trailer has an impressive cast with Janelle Monae as the lead and who appeared in Robert Zemeckis film, ‘Welcome to Marwen‘ a couple of years ago. There is also, Gabourey Sidibe who was Oscar nominated in 2009’s ‘Precious’, Jena Malone who appeared in the fantastic ‘Nocturnal Animals‘ with Amy Adams, Eric Lange, Jack Huston who was really good in Scorsese’s The Irishman, Tongayi Chirisa, Marque Richardson II, Rob Aramayo who will be in the forthcoming Kingsmen sequel, ‘The Kings Man‘, Kiersey Clemons and Lily Cowles co-star. The film comes from the producers of Us and Get Out and from the look of the Antebellum trailer the film addresses important issues in black history.

Antebellum is meant to open on April 24th 2020 in the US in the UK but at time of writing this release date has now been postponed to an as yet unspecified date.