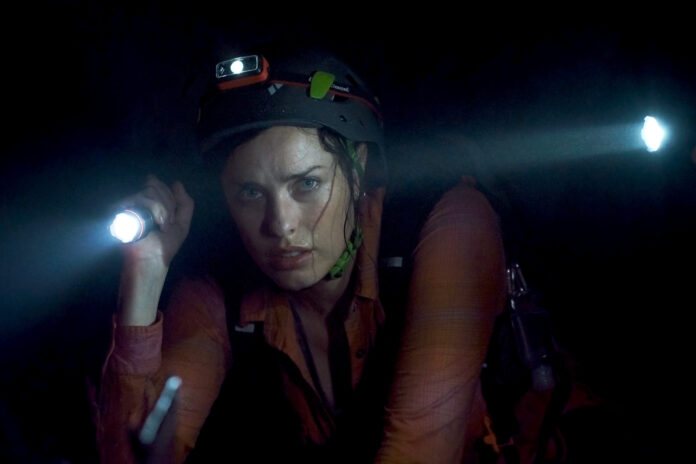 So now that the lockdown is being lifted by a prime minister with a striking similarity to a  sex crazed dandelion along with the aide of his sidekick, Gollum, we’re being bombarded with trailers as cinemas prepare to re-open. First up is the Black Water Abyss trailer a sequel to the 2007 thriller Black Water about backpackers stuck up a mangrove tree whilst a crocodile waits for them below

The Black Water Abyss trailer starts with adventure-seeking couple Eric (Luke Mitchell) and Jennifer (Jessica McNamee, THE MEG) and their friends Yolanda (Amali Golden, THE INVISIBLE MAN) and Viktor (Benjamin Hoetjes, 10×10 – watch the worst interviewer ever at the press junket in this clip) lowering themselves into an ominous cave in remote North Australia, with the help of the unpredictable Cash (Anthony J. Sharpe) as their guide. But when a tropical storm floods the cave and traps them underground, they soon realise they aren’t alone in the water.

This is just a taster of the chills and spills audiences can expect from the BLACK WATER: ABYSS trailer one of the first films to be released in UK and Irish cinemas when they re-open post-lockdown. Ideal for fans of CRAWL (Tarantino’s favourite film of 2019), THE SHALLOWS and THE DESCENT to get their creature feature fix, it will reintroduce audiences to jump-out-of-your-seat horror on the big screen. Directed by Andrew Traucki, who made the original BLACK WATER a low budget independent film that enjoyed cult status this standalone sequel is the perfect popcorn chomping, thrill-filled cinema visit this summer. This looks great fun and we’re keen if a little anxious to get back to seeing films on the big screen. You’ll enjoy the trailer, but dare you dive into the abyss for the full, fearsome lost in the dark experience?

BLACK WATER: ABYSS WILL BE RELEASED ONLY IN CINEMAS FROM 10 JULY WITH PREVIEWS FROM 4 JULY