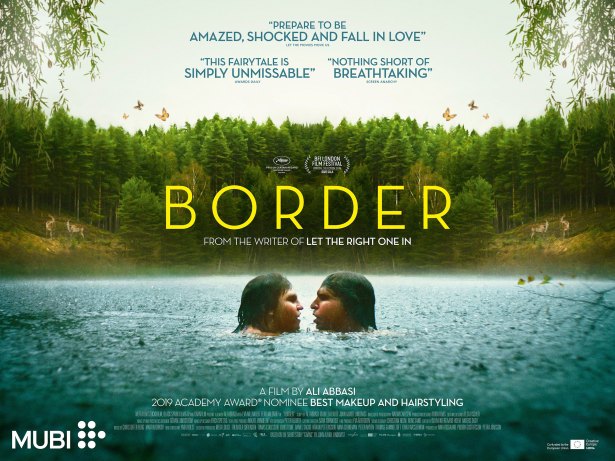 We see so many films often way ahead of their release dates and apart from the blockbusters several of the films we see we know very little about what we’re about to watch and sometimes it’s  a benefit discovering a film that’s nothing like you expect it to be. Border is one such film. Starting off with a character whose sex remains a bit of a puzzle until she’s addressed as Tina who works as a customs officer in Sweden with an uncanny knack for sniffing out crime from the incoming passengers. Literally sniffing them out….. able to detect any crime like Gemma Collins locating a discarded kebab in landfill.  It’s here that she encounters the films two main plot threads. The first is a business man who her sniffing skills uncover a crime that becomes ever more unsavoury. The second strand has her picking up on repeat passenger Vore (Eero Milonoff) with the similar distinctive looks as herself and with whom she slowly develops a relationship with which takes a most unexpected turn.

To say anymore about Border would be to spoil it because this is highly individual tale adapted by and Iranian director Ali Abbasi  from the same author as Let the Right One In and though it does sag a little and there are moments when you’re not sure which direction the story is going in and may get  little impatient for it to stay on point.  There is much in Border that’s wholly unexpected, disturbing and fascinating.  The two leads are great with Swedish actress Eva Melander almost unrecognisable in a role that requires her to do some scenes which wouldn’t look out of place in ‘I’m a  Celebrity’s’ bushtucker trials.  But she has transformed herself not just with prosthetics but unusually for a an actress has piled on the pounds like a De Niro in Raging Bull or more recently Christian Bale in Vice. It’s rare for a  female to do this without padding in her costume and the only person who we can think of who has done this for real is Gemma Collins when she auditioned for the lead role in Godzilla but having failed that went instead for a role in Essex Boys to play the part of Essex. But  It’s a bold move because there’s  a degree of nudity here for which she has to be admired in putting herself on screen in such a vulnerable way for posterity.

This is such an unusual film and though many will be put off by the subtitles its yet another foreign language film that deserves to be seen  for its unexpected plot twists and great performances.