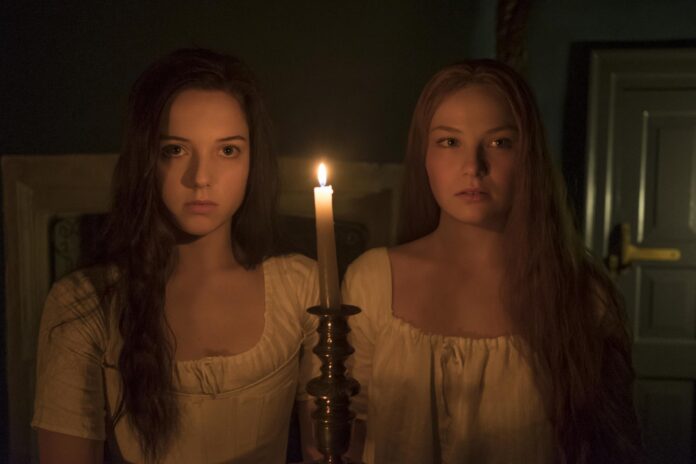 A bit of sauciness landed in our inbox when the Carmilla trailer landed ……An atmospheric, coming-of-age love story steeped in eerie mystery; a reimagining of Sheridan Le Fanu’s 19th century novella of the same name.

15-year-old Lara (Hannah Rae) lives with her father (Greg Wise) and her strict governess, Miss Fontaine (Jessica Raine), in total isolation and is struggling to find an outlet for her curiosity and burgeoning sexuality. When a carriage crash nearby brings a young girl into the family home to recuperate, Lara is enchanted by the eponymous Carmilla (Devrim Lingnau).

CARMILLA is the solo directorial debut of writer-director Emily Harris, starring newcomers Hannah Rae and Devrim Lingnau alongside Jessica Raine (Call the Midwife), Tobias Menzies (The Crown) and Greg Wise (The Crown). Cinematography by Michael Wood (Eight Days A Week), production design by Alexandra Walker (the Harry Potter films), editing by Rebecca Lloyd (American Honey) with a score composed by Philip Selway, drummer for the band Radiohead (who previously scored Polly Steele’s Let Me Go), costume design by the Academy Award-winning John Bright (A Room With A View), with hair and make-up by Julie Kendrick (The White Queen). Producers are Lizzie Brown and Emily Precious for Bird Flight Films, alongside executive producers Tilly Films in association with Altitude Film Entertainment, the film will be released in the UK and Ireland by Republic Film Distribution.

The Victoria and Albert Museum, where writer-director Emily Harris is a Curator of the Theatre and Performance Department, will host a London Premiere screening prior to release. A regional Premiere will take place at the Depot Cinema, Lewes on opening night 16th October. The film was shot on location in and around Lewes and Plumpton, East Sussex.