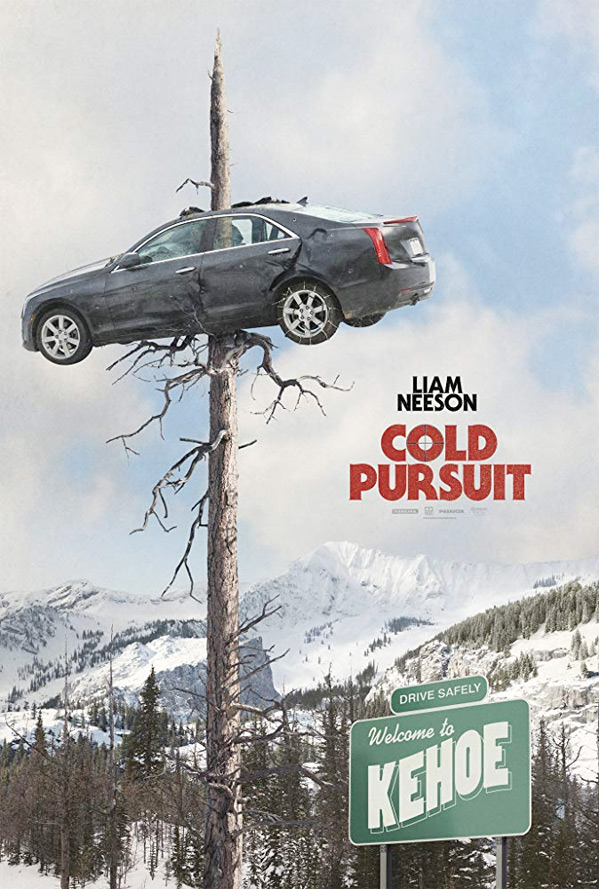 With Liam Neeson apparently leaving behind the action film genre that started with the Taken franchise he’s turning his hand now to what looks like very black comedy if the Cold Pursuit trailer is anything to go by.

Welcome to Kehoe, it’s -10 degrees and counting at this glitzy ski resort in the Rocky Mountains. The local police aren’t used to much action until the son of unassuming town snowplough driver, Nels Coxman (Liam Neeson), is murdered at the order of Viking (Tom Bateman), a flamboyant drug lord. Fueled by rage and armed with heavy machinery, Nels sets out to dismantle the cartel one man at a time, but his understanding of murder comes mainly from what he read in a crime novel. As the bodies pile up, his actions ignite a turf war between Viking and his long-standing rival White Bull (Tom Jackson), a soulful Native-American mafia boss, that will quickly escalate and turn the small town’s bright white slopes blood-red.

The film is a remake of the Skellan Skarsgard film, ‘In Order of Disappearance’ back in 2014 which was a really, really great little film but as it was subtitled few saw it but was well worth making the effort to see. This remake is directed by Hans Petter Moland who also helmed the original.

Neeson also has a straight drama called ‘Normal People’ coming out soon which looks a far more sombre affair than the Cold Pursuit trailer. As well as Liam Neeson the Cold Pursuit trailer also features Tom Bateman, Laura Dern and Emmy Rossum. Interestingly the film was refused a permit to shoot in Banff National Park in Alberta, Canada as they objected to the antagonist of the film being an aboriginal Canadian. Even the actor playing the role could not sway the government agency’s opinion.