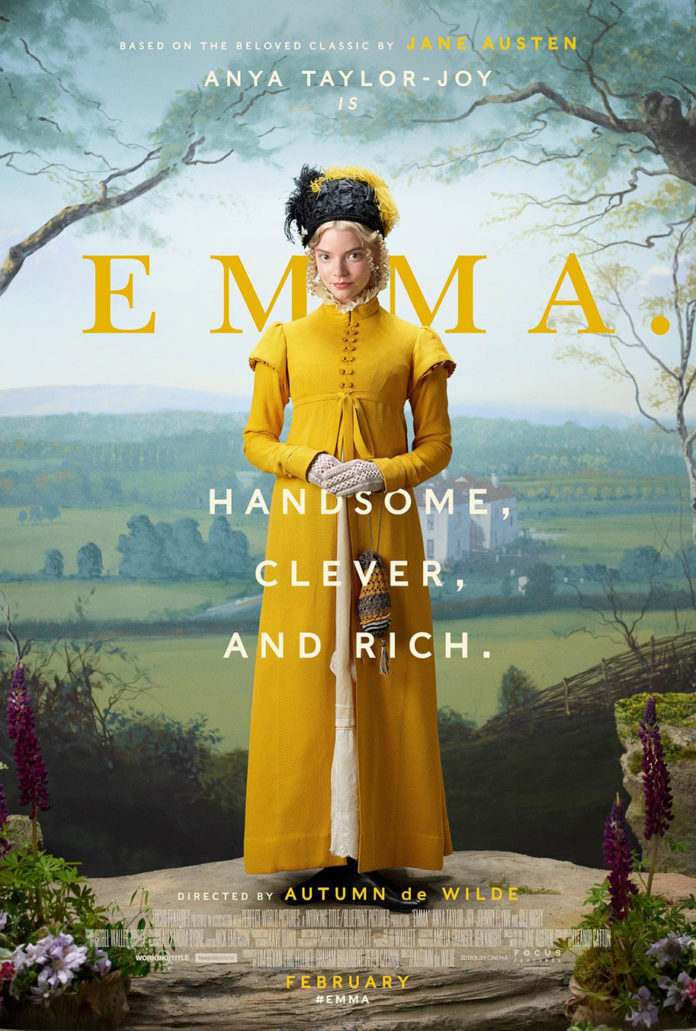 Dating apps seem to be the future of dating and something that our Editor was a big fan of until he got whiplash from voodoo after being left swiped so often on Tinder. (‘You’re fired!’ – Ed) and now the only matchmakers he likes are the chocolate ones. Emma is the matchmaker from the classic Jane Austen novel and gets another outing after the reworking in Clueless and Gwyneth Paltrow ‘s 90’s version before she started flogging dodgy scented candles.  This time it’s Anya Taylor Joy who gets to play the role but this time with flinty zeal. Living with her father, played in the usual great comic turn by Bill Nighy as a man obsessed with drafts, Emma is a little bit smug and somewhat deluded in her belief of her abilities to match make especially for her friend Harriett (Mia Goth) as well as playing it a little too cool with other suitors and over confident in her youth to manoeuvre romances as she sees fit. At the same time there’s the inevitability that Emma will be unable to contain her feelings before she takes the plunge into romance too.

Directed by Autumn De Wilde best known for her music videos for Beck this is her feature film debut with lavish sets and locations and ornate costumes all fleshed out with endearing performances led by Joy and Jonny Flynn who we will shortly see in the David Bowie bio-pic ‘Stardust’ later this year. There’s great support from Miranda Hart as an eager to please hanger-on who Emma delivers  a cruel verbal blow at a picnic but its Josh O Connor as Mr Elton who steals every scene he is in as a creepy, obsequious, grandiose , vicar and is enormously entertaining whenever he appears. With Joy’s headstrong Emma far different from Paltrow’s sunny delight Emma which is in contrast to the cynical online shop saleswoman of bizarre unproven health accessories that she now likes to peddle. At 2 hours this is overlong but full of gentle laughs.