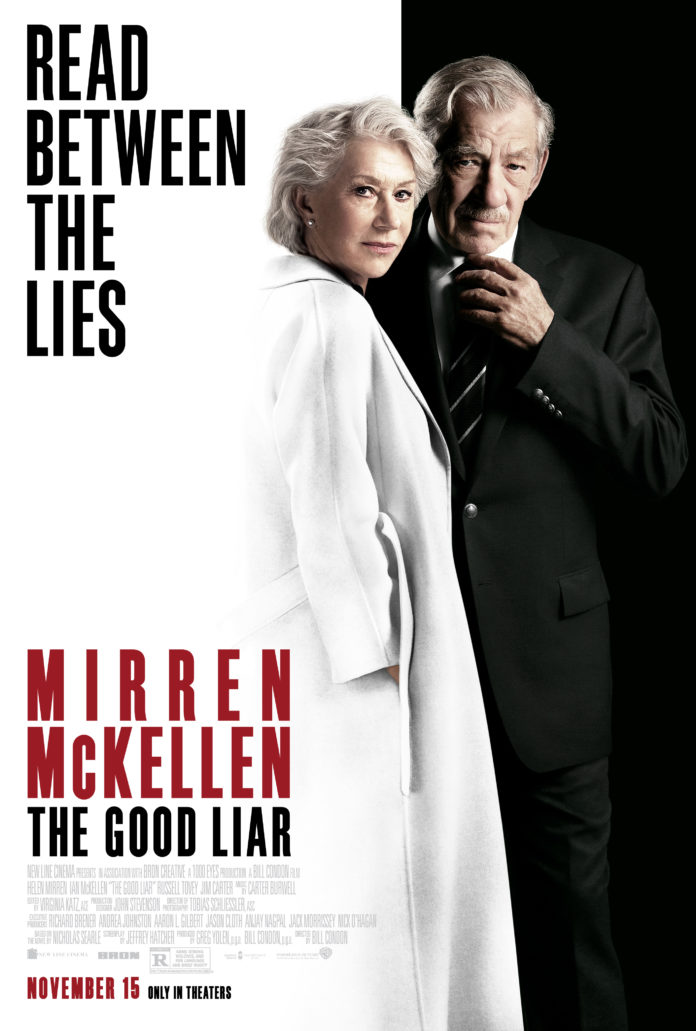 So a little while ago we told you here about a new film starring acting collossus’ (collosii?) Sir Ian McKellen & Dame Helen Mirren to be directed by Bill Condon who has worked with McKellen previously on ”Gods and Monsters” and “Mr. Holmes”. Now we have the first result of the collaboration with The Good Liar trailer and it does look ingenious.

In the film, career con artist Roy Courtnay (McKellen) meets well-to-do widow Betty McLeish (Helen Mirren) online. As Betty opens her home and life to him, Roy is surprised to find himself caring about her, turning what should be a cut-and-dry swindle into the most treacherous tightrope walk of his life.

Russell Tovey and Jim Carter also star while Jeffrey Hatcher, who also wrote the screenplay for Mr Holmes, penned the script. Interestingly the film has been rated R in the USA for some strong violence, and for language and brief nudity…….hmmm now we know Helen Mirren in the past has not been shy about getting her kit off but maybe its someone else in the film. Mirren apparently will also crop up in this summers action blockbuster ‘Hobbs and Shaw’ whereas McKellen will appear in the adaptation of Andrew Lloyd Webber’s musical ‘Cats’ later this year. Both actors are Oscar winners as is director Condon whose last film was Disney’s Live version of Beauty and the Beast which did pretty well at the box office in 2017 making $1,263 billion dollars which would have been the number one film at the box office that year if The Last Jedi had not been released earning a not insignificant $1.332 billion.

The film opens in cinemas in the USA on November 15th 2019 and at present does not have a UK release date but that’s sure to be announced soon.