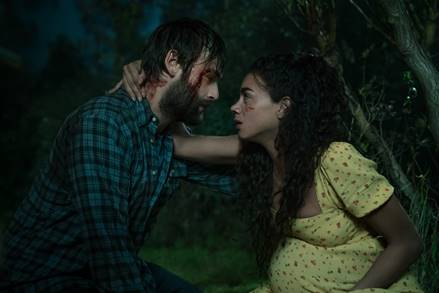 ‘Gremlins meets Straw Dogs’ is a a pitch that caught our eye and its because production has just wrapped in London on director Jon Wright’s (Robot Overlords) creature feature, ‘The Little People’, starring Hannah John-Kamen (Ant-Man and the Wasp – UK premiere footage HERE) and Douglas Booth (The Limehouse Golem) as a couple who escape their urban nightmare to the tranquility of rural Ireland only to discover malevolent, murderous goblins lurking in the gnarled, ancient wood at the foot of their new garden.

Additional cast include Golden Globe nominee Colm Meaney (Pixie), Jamie-Lee O’Donnell (Derry Girls), Chris Walley and Kristian Nairn . A modern horror creature feature, The Little People shows us just how far we will go to protect those we love. Described by Wright as “Gremlins meets Straw Dogs” the film is based on an original screenplay by Mark Stay (Robot Overlords) and Jon Wright.

The Little People is being funded by Ingenious Media and is produced by Piers Tempest (Military Wives, The Wife) and Peter Touche (Unhinged, Military Wives, Blinded by the Light) as a Tempo Production in association with Automatik VFX. Tempo’s Jo Bamford, Alison Thompson and Mark Gooder of Cornerstone Films and Janine Modder, who has worked on the Bond franchise since 1997, are executive producing. Further executive producers include Matt Williams, Jamie Jessop, Andrea Scarso, Michael Reuter, Seb Barker and Doris Pfardrescher.

The film has also reunited the Grabbers creature team; including prosthetics by Shaune Harrison who has worked on some of the world’s highest grossing blockbusters including the Harry Potter films, Star Wars: The Phantom Menace and Avengers: Age of Ultron along with creature designs by Paul Catling (Maleficent, Thor, Fantastic Beasts – watch Ezra Miller lose the plot here) and long time Wright collaborator VFX supervisor Paddy Eason (28 Weeks Later, Harry Potter and the Prisoner of Azkaban).