The only Heathers we know are Locklear, Graham & Mills-McCartney – in turn a TV actress, a film actress and a and former swivel eyed, peg legged loon of a wife to Sir Paul McCartney. The world watched as she attempted to make ludicrous demands as she divorced Sir Paul bur to the rest of us Heather Mills-McCartney didn’t have a leg to stand on (‘You’re fired! – Ed).

Thankfully the 1988 film Heathers was a far better watch.  It was an extremely dark comedy featuring Winona Ryder as good girl high school student Veronica Sawyer who falls in with an elitist clique of three girls in her year all called Heather. She soon realises that being in with them, far from raising her status is actually destroying her and she befriends Jason aka JD (Christian Slater) unwittingly unaware that he is an utter sociopath and gets drawn into his plot to kill the Heathers along with all the other cool kids.

Coming out as it did at the end of the Eighties Heathers was a macabre kick in the teeth to all those John Hughes high school films that included Pretty in Pink, Sixteen Candles, The Breakfast Club and best of all, Ferris Bueller’s Day Off. In their own way each were excellent films and caught the mileau of being a teenager in a decade of excess. Heathers was to put an end to all that. Heathers was a film with the blackest of humour dealing as it did with teen suicides and high school gun massacres. It was edgy territory and with school massacres now an almost weekly occurrence it’s unlikely that this could ever be made today. In a tragically ironic turn Jeremy Applegate who played one of the boyfriends in the film committed suicide some years later. He was not the only one with Jeremy Applegater, who played the head Heather tragically falling prey to a brain tumour in 2001. Walker had also been in line to possibly play the lead role because at the time she was real life girlfriend to Christian Slater who had instant appeal as a younger version of Jack Nicholson. 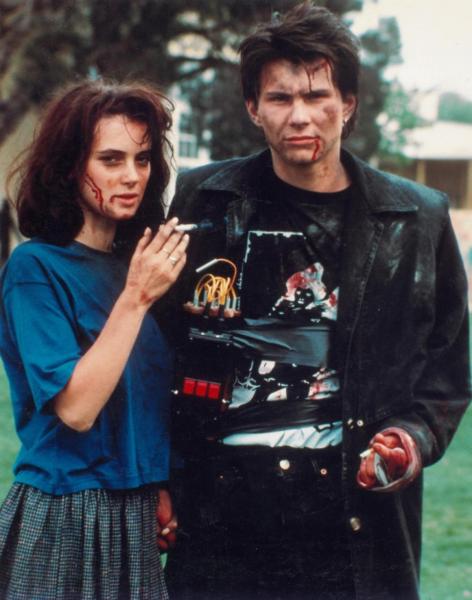 Written by Daniel Waters it was his first produced script and was a fore runner to his follow up film The Adventures of Ford Fairlane, a comedy starring the alleged comedian and immensely objectionable Andrew Dice Clay. It was also the feature film debut of director Michael Lehmann who had graduated from film school with his less than subtle short film, ‘The Beaver gets  a Boner’  which is an extra on the disc here.  Together they would make a film that was oh so ‘very’ – just one of the cult words and phrases that littered the film and would enjoy a brief usage in teenage parlance. To Waters it was ironic that his lines were used by real life cool kids as he was more than aware of his own geek-ery. The disc includes a featurette ‘How Very’ about various aspects of the film with Lehman, and the production designer, art director of Heathers. It’s one of many featurettes on the disc and all are of the usual high standard you can expect from Arrow video releases

Winona Ryder , herself only 16 when the film was being shot meaning she had to have school lessons on set as the crew also filmed school lesson scenes on set, won the role over Justine Bateman, Jennifer Connolly, Drew Barrymore and ironically Heather Graham.

30 years later Heathers is, if maybe slightly dated, still relevant in its depiction of the horror of US high school and the disc is another great release from Arrow video with a wealth of great extras some of which were on the first release of the disc but many are new.

With a 4K scan the picture is sharp with audio to match and has a great commentary track  by Lehman, Waters and producer Denise Di Novi plus a newly shot interview with Lehmann and an appreciation of the film by comedian John Ross Bowie from The Big Bang Theory. There’s also a discussion of the films casting with respected casting director Julie Selzer who at that point had only Grease 2 with a young Michelle Pfeiffer (Murder on the Orient Express) but went on to cast Robocop and Lehmann’s 1990 film ‘Meet the Applegates’.

For Lehmann Heathers was his finest hour and after its success he was quickly courted to make the Bruce Willis blockbuster that bombed, ‘Hudson Hawk’ (which actually is far better than its given credit for) along with writer Waters. From there on apart from the very occasional film he has worked mostly in TV . For writer Waters he fared slightly better going on to write Batman Returns and Demolition Man. With Heathers now a West End musical as well as a TV series the re-release of the film is a reminder of how good a debut it was.