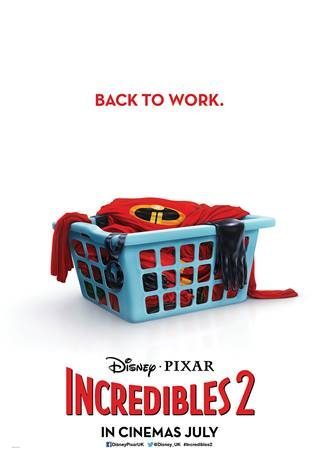 Though no one was crying out for a sequel to ‘Cars’ let alone two sequels there was a definite longing to see a sequel to The Incredibles. So this summer sees that long awaited follow up to the 2004 original called obviously Incredibles 2 trailer is now here.

The synopsis of the new Incredibles says Elastigirl may have hung up her Supersuit when the Supers were lying low, but in “Incredibles 2,” she’s recruited to lead a campaign to bring them back into the spotlight. With the full support of her family behind her, Helen finds she’s still at the top of her game when it comes to fighting crime.

The first film made a huge $633m worldwide and its likely the sequel will do similar business. Holly Hunter and Craig T Nelson return to voice the lead roles and are rejoined by Samuel L Jackson. New to the cast are Catherine Keener, Bob Odenkirk, Isabella Rossellini and Pixar favourite John Ratzenberger puts in his usual cameo.

As well as writing the sequel Brad Bird returns to direct too as well as voicing Edna ‘E’ Mode, who creates super suits for the world’s heroes.

His return to animation is a major plus point when his previous animated films have included The Iron Giant & Rataouille before he went onto direct live action with the excellent Mission Impossible Ghost Protocol. That film reinvigorated the franchise and Bird went onto make ‘Tomorrowland’ starring George Clooney. At a cost of $190m it needed to do well. Unfortunately it bombed making only $210m and might be the reason why Bird has returned to the safety of an Incredibles sequel.

Though this is more of a teaser the Incredibles 2 trailer does give a glimpse at what treats  are in store.