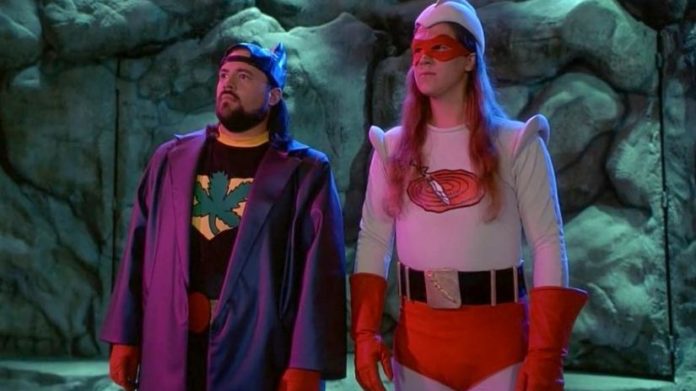 So whilst it looks like we may never see a film version of Clerks 3  writer / director Kevin Smith has made a sequel to Jay and Silent Bob Strike back and here’s the Jay and Silent Bob Reboot trailer  which boasts the return of Jason Mewes and Kevin Smith as the titular stoner icons. In the new movie, Jay and Silent Bob discover that Hollywood is rebooting an old movie based on them and so the clueless duo embark on another cross-country mission to stop it all over again.

Smith has previously teased that there are three Batman actors in the film and now two are confirmed today – Val Kilmer and Ben Affleck. The third is rumored to be animated series voice actor Kevin Conroy. Kilmer was seen in footage playing Bluntman while Affleck reprises his “Chasing Amy” role of Holden. Also returning are Matt Damon as Loki from “Dogma,” Jason Lee as Mallrats’ Brodie, Rosario Dawson as Becky from “Clerks 2,” Shannon Elizabeth from her part in “Jay and Silent Bob Strike Back” and cameos from the likes of Chris Hemsworth, Melissa Benoist, Jason Mewes and James Van Der Beek. It’s also rumoured that his favourite actor Nicholas Cage may put in a cameo Smith has recovered from a heart attack and his recovery has been well documented having lost a huge amount of weight and ironically the first day of filming was exactly a year after the heart attack so the insurance underwriters must have put him through a whole load of medicals to allow him to helm the film.

Fathom Events and Saban Films will present the full-length film in more than 600 North American movie theaters on Tuesday, October 15th with an encore on the 17th. No UK release date has been secured just yet.