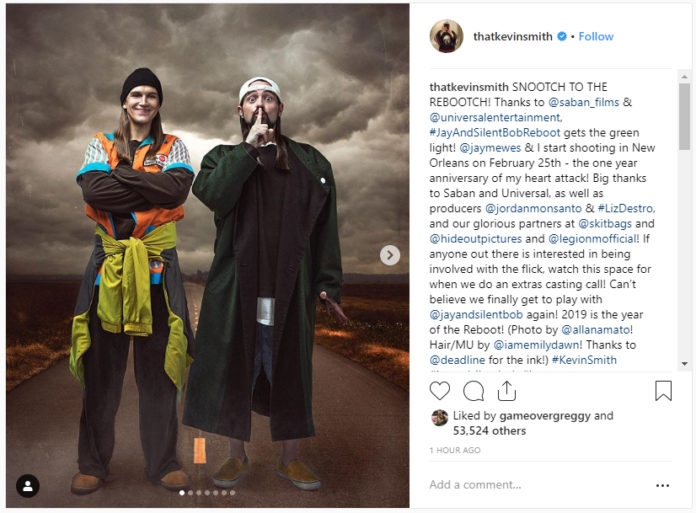 Writer / Director Kevin Smith has announced that production has wrapped on the upcoming film ‘Jay and Silent Bob Reboot’ after speedy three-week shoot that took place in New Orleans.

Now if you’re not familiar with Jay & Silent Bob they were a pair of periphery stoner characters played by Jason Mewes & Kevin Smith who hung about outside the store in Smith’s debut film ‘Clerks’ and have since gone onto appear in many of his subsequent films. Now though ‘Clerks 3’ was on the verge of going into production until the Weinstein scandal its seems that instead he has chosen to reboot the Jay and Silent Bob Strike Back feature film he made in 2001 which had both as the leads and now he’s made a sequel / reboot knowingly titled Jay and Silent Bob Reboot.

According to Smith the shoot for this new film took exactly the same time as it took him to shoot ‘Clerks’ 26 years ago and has called this new film his ‘Askewniverse magnum opus’. – ViewAskew being his production company. Smith and Jason Mewes are reprising their title roles alongside other stars  from the original film.

The new movie will take pot shots at reboots, remakes, and sequels while simultaneously being all three at the same time. The wrapping comes as actor Ben Affleck revealed to Collider he hasn’t been asked to make an appearance and if he had a choice he’d love to come back as his “Chasing Amy” character Holden McNeil.

Smith suffered a massive heart attack last year and since then he’s gone on a diet losing an immense amount of weight and looks much better for it and Mewes has had his issues with drug addiction which he seems to be over with now.

Jay and Silent Bob Reboot has no release date set yet.

Here’s one of our favourite moments from the pair – especially if you if like, ‘Silence of the Lambs’ (NSFW)……