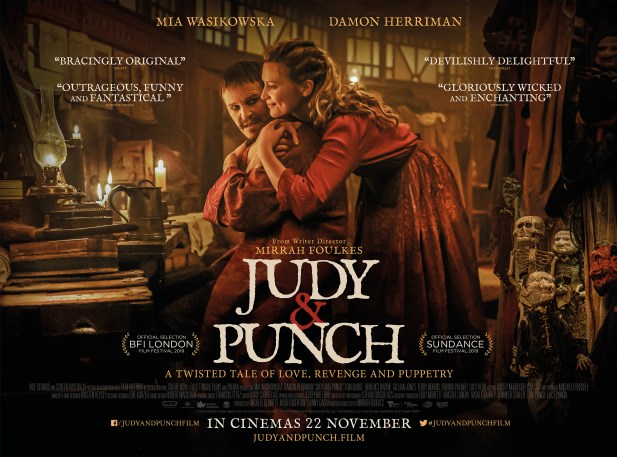 With the Rugby World Cup in full swing the batterings and concussions are brutal and the only people who get it worse are singer Chris Brown’s girlfriends. But we’d be the first to admit that domestic violence is no laughing matter and we’ve never understood why anyone thought Punch and Judy would make an entertaining children’s seaside puppet show so see what you make of the Judy and Punch trailer.

With her joyously irreverent live-action reinterpretation of the famous 16th-century puppet show, writer/director Mirrah Foulkes the traditional story in the  Punch and Judy trailer is turned on its head and brings to life a devilishly delightful tale, starring Mia Wasikowska (Crimson Peak, Alice in Wonderland) and Damon Herriman (Once Upon A Time in Hollywood).

In the outlandish town of Seaside, located nowhere near the coast, puppeteers Judy and Punch are trying to resurrect their marionette show. The show is a hit due to Judy’s superior puppeteering, but Punch’s driving ambition and penchant for a drink lead to an ill-fated turn of events that Judy must avenge.