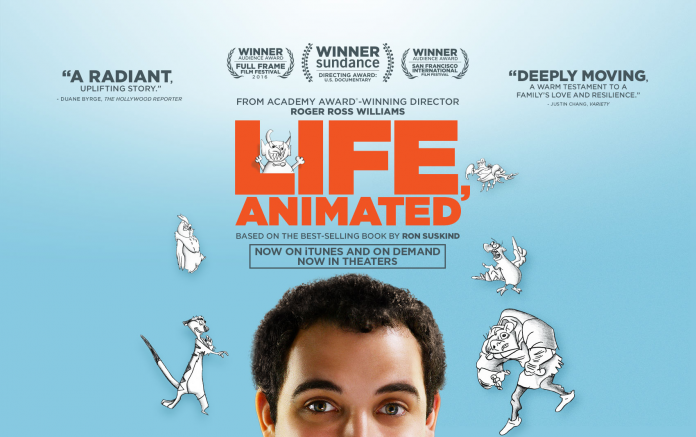 Many parents try to excuse their children’s behaviour by saying that they suffer from ADHT whereas the truth is actually that the kids are monstrously misbehaved who would benefit greatly from a clip round the back of the head with a cricket bat. It’s a technique we’ve tried to persuade the Editor to use on his kids, Adolf and Damian, but to no avail. But we digress because this week’s new film, ‘Life ,Animated’ is a documentary that focuses on a family whose child, Owen Suskind, suffers from autism and one of its many moving moments is when his father finds that at three years old Owen just suddenly stopped communicating before eventually being diagnosed with the condition. This was twenty years previously when diagnosis was in its early stages and the despair  on his, and especially his wife’s, face when they’re told he will never be as he was is heartbreaking. But if there’s tearjerking moments it’s more than balanced with poignant and uplifting scenes. The revelation here is that Owen learns to speak again through his love of Disney animated movies highlighted in a pivotal scene from The Little Mermaid where he uses  the phrase, ‘just your voice’ to start talking to his father again.

It’s Owen’s love and knowledge of repeated viewings of Disney classics that helps him regain his speech   but there’s much more to this when he starts using moments from the films to help him deal with moments in his own life and even goes as far as to set up a Disney group for other autistic children to attend and isolate key scenes that deal with universal themes which they then discuss in relation to their own lives. In fact its Owen who frequently punctuates the film with unexpectedly profound questions which can be perceived as inside there’s someone struggling to break  out from the shackles of autism. Perhaps one of the films many highlights is when two of the actors  who voice characters in Aladdin attend the group to re-enact scenes from the film with them and there’s a sense that they get as much fulfilment out of this as the group of children who are enthralled by the actors read through.

Beyond this the documentary follows Owen as he prepares for independent living away from his parents in dedicated apartments where his girlfriend also lives and there are scenes between the two of them which are touching yet at the same time are uncomfortable viewing , it’s as though you’re listening in on a vulnerable couple who deserve their privacy. It’s becomes truly heartbreaking though when she decides to break up with him and Owen can’t quite understand why this is but at the same time is restricted by autism and is unable to just cry it all out and it’s his mother who seems perpetually in tears as she watches him struggle with the break up as well as for the audience especially as Own stands in the car park there calling out her name as she just walks by him seeming to ignore him.

Much of this is seen through the eyes of his parents who worry about who will care for him as they get older and infirm and his brother who poignantly realises that the responsibility is going to fall on him and he too is unsure as to how he will cope but provides some unintentionally  funny moments as he tries to teach his brother about sex without upsetting him.

It’s an affecting documentary albeit a little too long and some moments are not fully justified  –  why he’s asked to give a speech in France is never explained and why Owen should be singled out rather than any other autistic child also remains unanswered and it would be perhaps harsh to say that it’s perhaps Disney studios who come out of this well that had some bearing on the documentary being made. However this is a generally upbeat and almost inspirational film and is likely to be a contender for best doc once the Oscar nominations come round.