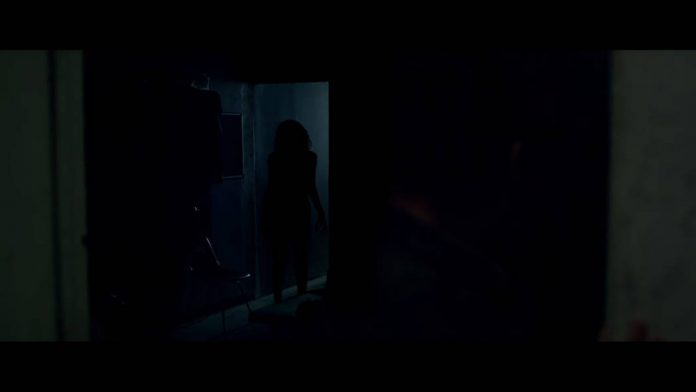 As entertaining as YouTube is it has also enabled  people to foist their ropey homemade films including all manner of immensely unamusing juvenile pranks some of which have unbelieveably led to feature film deals a la the recent ‘Natural Born Pranksters’ movie which had less laughs than a funeral cortege. Director David F Sandberg however has made short films which are in a different league being well made and perhaps most importantly they’re really, REALLY scary and an unnerving 5 minute short film he made called Lights Out has landed him with a pacy 81 minute feature film which is as good as anything else out there in the horror genre and owes much to Saw/Insidious/Conjuring director James Wan which is probably why he’s produced this film too.

With an opening scene set in a dark warehouse that sets the tone for the rest of the film we’re first introduced to the silhouette with glowing eyes that can only be seen with the lights off. Before we relocate to a family home where a young boy Martin (Gabriel Bateman) lives with his widowed mother (Teresa Palmer).  It’s here that we first see her appear to be holding a conversation with someone or something that we can’t see in the light that raises cause for her sanity and her ability to care for her son.

Maria Bello as his older step sister, Sophie, who lives in her own flat having grown tired of her mother’s depressive manic behaviour and bit by bit we begin to find out about this mysterious figure of the night that is actually a dead friend of their mothers called Diana. With a battle between sister and mother as to who Martin should live with for safety the scene is set for the inevitable showdown with Diana.

With a back story that is the thrust of the narrative the film there are some plot weak points, the age difference between the three leads is one and the other is a certain lack of credibility with Martin who, having been terrified by Diana when living at his mother’s house then insists on staying there to support his mum.

But that aside what audiences will enjoy most is the effective set pieces where the back story wholly justifies the scenes being set in the dark which only compounds the superbly constructed scares. It’s a film that brilliantly taps into a universal fear of the dark.  Sandberg has learnt much from James Wan and added more of his own touches which will ensure that you’ll never switch the lights off at night again. With the ghastly Diana’s appearance being preceded by the scratching of wood which, as a continual motif throughout the film sets your nerves on edge,  Diana is set to be the new Freddy Krueger and unusually the film avoids the standard setting up for a sequel which audiences are sure to demand after what is an albeit series of highly effective set pieces in one of this year’s most effective chillers.