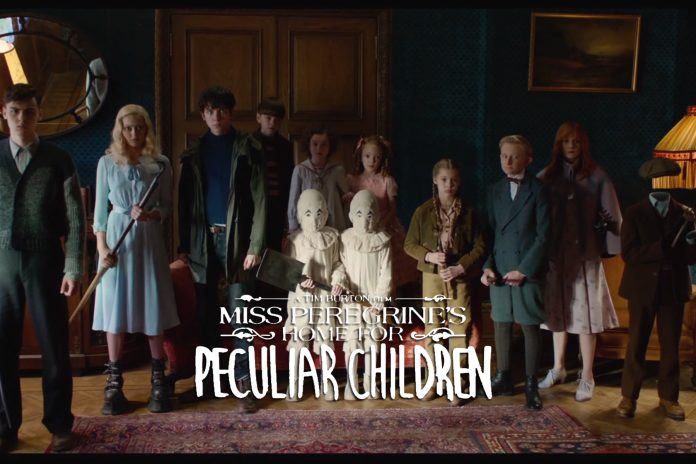 Everyone had a frankly freaky kid in their year at school. Whether it be the kid who would swop the latest gadget for a Kit Kat or the one who was a stranger to personal hygiene or that really, really odd one who said he was going to be the Editor of a film website (‘You’re fired!’ – Ed) they were all people you knew would grow up to be shunned by society. Tim Burton has made something of a career of films about outsiders and after a recent spell of commercial duds ( ‘Dark Shadows’, ‘Sweeney Todd’) he’s made a return to better films starting with ‘Frankenweenie’ and the comparatively normal ‘Big Eyes’. He’s found a perfect match for his talents with his adaptation of Ransom Riggs’ book Miss Peregrine’s Home for Peculiar Children – and some of these kids are really peculiar.

It takes a while to settle down as Asa Butterfield as Jake finds his grandfather (Terence Stamp) revealing a mystery from his own childhood that starts to impact on his day to day existence so his father played by Chris O ‘Dowd with an American accent takes him off to Wales where he finds the ruins of Miss Peregrines Home for Peculiar Children where his grandfather’s troubles began. Once here the story focuses on why the date 3rd September 1943 is so important and much centres on the ability of  Miss Peregrine’s (a vampish Eva Green) ability to stop time and rewind meaning that she and the children in her charge never age.  It’s the children that Jake starts to bond with as, much like X-Men, this is a school for kids with special powers, one is lighter than air and has to wear heavy boots to stop floating away, an invisible boy, a pair of twins have bags over their heads as their horrifying faces can turn you to stone – wish the Editor would do the same with his twin boys , Adolf and Damian (You’re definitely fired! – Ed), another can project his dreams via an eye glass onto walls, a girl has incredible strength and so on. It’s here that he finds he has a power too which can save them from some utterly horrifying creatures that are truly disturbing with their spindly limbs and multiple thrashing tongues from their eye-less heads – its well worth heeding the 12a certificate for Burton really gives full rein to his visuals here. For once it’s good to see the director get back to the visuals at which he excels because there are some magnificently unnerving gothic visions in this and he has been well served by his cinematographer Bruno Delbonnel who has worked on several films for Burton before but this is undoubtedly his best. The one thing that is missing from what is a typically Burtonesque film is his composer Danny Elfman.

For a director whose style is distinctive and influential it seems that he too has been influenced by others most notably Guirupertllermo del Toro, which is no bad thing, as well as Ray Harryhausen with it’s stop motion moments and especially its nods towards the skeleton fight from Jason and the Argonauts amongst others.  With a decent cast led by Eva Green its actually Samuel L Jackson who steals a lead on them all with a rip roaring, scene stealing turn which, when he does finally appear, rampages through the film. Judi Dench puts in an appearance to no real effect though Rupert Everett has a decent minor role and Terence Stamp, along with Eva Green, seems to have become a recent favourite for the director possibly supplanting Vincent Price in his affections. . For children the plot may be too involving and there are some disturbingly intense scenes featuring the hellish hollow creatures that will have kids screaming for the doors but though the film is clunkily titled and overlong it is a return to form for Burton.