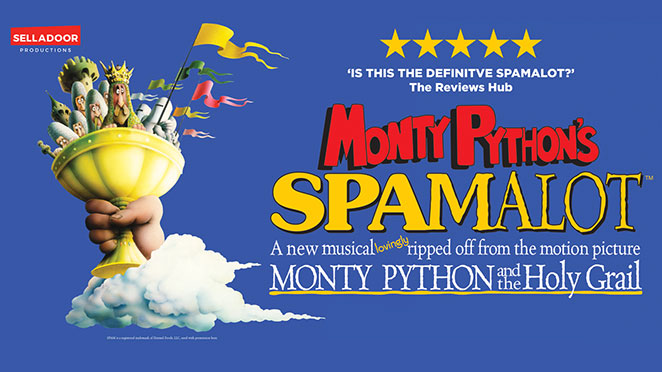 OK OK OK so we know that strictly speaking Spamalot was not really a Monty Python production but their second feature film ‘Monty Python and the Holy Grail’ spawned a massively successful hit musical ‘Spamalot’ written by Eric Idle. In almost meta joke style the musical of the film is now about to become a film again with the rights having been acquired by 20th Century Fox.

For those not in the know ‘Spamalot’, was a Tony-Award winning Broadway musical comedy production and was a parody of the Arthurian legend. Tim Curry, Hank Azaria and Christian Slater starred in the play’s original run which became one of the highest-grossing plays of all-time pulling in over $175 million.

The musical played in London’s West End for some years before touring the country and starred a variety of stars including Tim Curry, Marcus Brigstocke, Jon Culshaw, Phil Jupitus, Joe Pasquale, Stephen Tompkinson, Les Dennis, Warwick Davis and at one point even Michael Palin put in a brief appearance as God. Eric Idle who wrote many of the songs for the Python films (‘Always look on the bright side of life’ being one that will almost undoubtedly play at his funeral) also co- wrote the songs with John Du Prez and will now write script for the film too. Casey Nicholaw, who directed the stage play ‘The Book of Mormon’ will direct the film which will be his debut feature film gig. We can expect to see the film possible towards the end of 2019 but more likely in 2020.

With Graham Chapman having died way back in 1989 and Terry Jones diagnosed with primary progressive aphasia the likelihood of a new Monty Python film is low to non existent.

Anyway here’s the rather fab ‘Camelot’ song from ‘Monty Python and the Holy Grail’ that inspired the Spamalot musical in the first place.