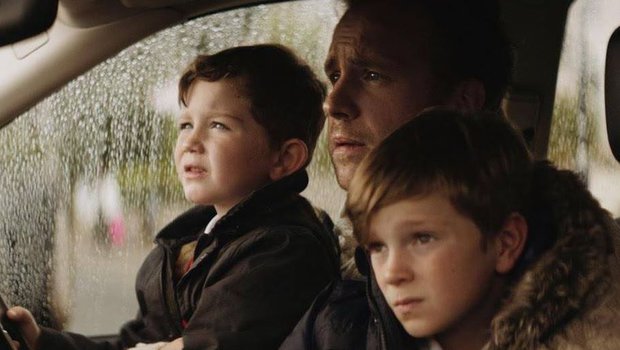 This week’s new  release, ‘Mum’s List’ is yet another of the utterly tragic true stories based on a best selling book with grief writ large throughout.

It’s not immediately obvious what has happened as Singe (Rafe Spall) waits outside a primary school to pick up his children struggling to keep his emotions in check for the sake of the two boys as much as himself. It’s only when he takes them home that we come to know that he is recently widowed having lost his wife (Emilia Fox) to an incurable cancer and he himself is now consumed with grief but doing his best to keep it together for his children.

The film flits back to the start of their relationship having met in a roller disco where he works before jumping back and fore in time as they marry and she discovers a mysterious lump and the treatment which she undergoes optimistic in the belief that she will get though it all with the audience knowing only too well how this is going to end. Both leads are good, especially Spall who conveys his inner turmoil and total devastation at the loss of his wife with the slightest of looks. If there’s any criticism of his role it’s that he never seems to work. There’s no sense of him coping to balance his work and child care at all. For all we know he still works at a roller disco. Fox too is fine in a role which unusually is a little less sympathetic primarily because she seems to be a bit of a control freak writing innumerable notes and instructions (which is where the film gets its title)as to how Spall should raise the kids and what to do. It’s almost as though she believes him to be so utterly inept as  a father that he needs a step by step handwritten guide from beyond the grave. And unusually for someone who suffers from the side effects of chemotherapy despite losing her hair manages to retain her eyelashes and eyebrows.

With a sound track featuring cover versions by 80’s stadium rock behemoths Simple Minds with songs pointedly played during certain scenes including  (I promised you a miracle, Don’t you forget about me, etc) this should all pack a hefty emotional wallop. Except it doesn’t. There are some undoubtedly moving moments but it’s overlong and lacks the one big emotional hit the tearjerker it clearly wants to be.

From the beginning it states that it’s a true story and photos that feature throughout the end credits of the author and his late wife are there as if to prove it but it’s difficult to know who this film is really aimed at. Anyone who suffered similar circumstances is unlikely to want to relive it all again and there is nothing remarkable about the story as so many other people will undoubtedly have unfortunate to have endured which makes it all a little bit self indulgent really which is a shame as this is undoubtedly sincere in it’s intent.