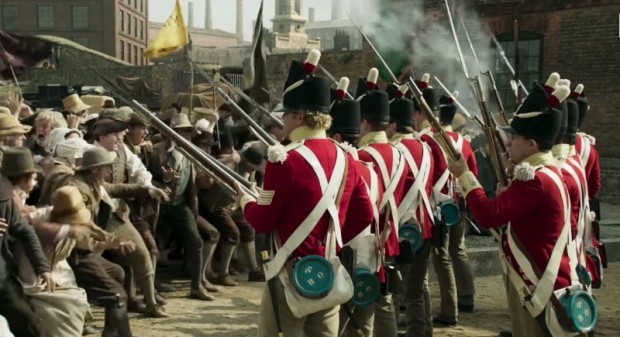 The Peterloo trailer is for the latest film from British director Mike Leigh’s work whose back catalogue has included a whole load of Oscar nominated films for him including Secrets & Lies, Topsy-Turvy, Vera Drake, Happy Go Lucky and Another Year. He’s also been nominated and won even more BAFTA awards too.

An epic portrayal of the events surrounding the infamous 1819 Peterloo massacre, where a peaceful pro-democracy rally at St Peter’s Field in Manchester turned into one of the bloodiest and most notorious episodes in British history. The massacre saw British government forces charge into a crowd of over 60,000 that had gathered to demand political reform and protest against rising levels of poverty. Many protestors were killed and hundreds more injured, sparking a nationwide outcry but also further government suppression. The Peterloo massacre was a defining moment in British democracy which also played a significant role in the founding of The Guardian newspaper.

The Peterloo trailer stars Rory Kinnear (probably best known for the Daniel Craig era Bond films) as Henry Hunt as one of the Establishment involved in ordering the massacre and probably just well known now as being cockney rhyming. Kinnear actually wrote a speech he delivers in the film. Maxine Peake also stars as Nellie a member of the uprising. Peak has admitted that despite being a widely admired actress she was so keen to appear in the film that she wrote directly to Leigh asking for a role in the film. It worked.

PETERLOO will receive its UK premiere at the 62nd BFI London Film Festival on Wednesday 17th October. The film has alrady played at the Toronto International Film Festival to acclaim as most Mike Leigh film’s do.