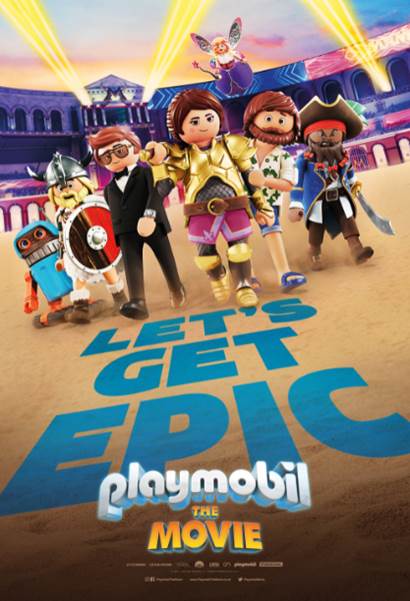 With the huge success of The Lego Movies it seems only right that their counterpart building block toys Playmobil get a look in. So after The Lego Movie and Horrible Histories The Movie we now have Playmobil – the Movie  a title with all the imagination of politician David Davis parents when it came to naming him. In fairness this does what it says on the tin except the initial surprise here is that it  starts off as a live action film with teenager Marla (Anya Taylor-Joy) doing all those teenage girl type things and putting up with her irritant of a little brother. It’s all as might be expected with a song and dance number thrown in which all comes to a crashing halt when police arrive to tell them about the death of their parents in a car crash. It’s a bit of a gut punch moment for a kids film that sits uneasily with what has gone before but Marla then takes on the parental role with seemingly no intervention from social services and they continue living in the family home.

It’s here that her little brother and his obsession with Playmobil toys who wangles his way into an exhibition of the toys before its opened to the public where, in an unexplained moment, they both find themselves whisked into a world of Playmobil. It’s 25 minutes before the animated world kicks in which may frustrate kids but the Playmobil themed lands are nicely animated in bright and breezy colours. Marla and her brother then find themselves embroiled in a genre mash up with Vikings, Pirates and an evil Roman Emperor and the pair have to call on a James Bond wannabe Rex Dasher voiced by Daniel Radcliffe in a nicely self deprecating role marred only by the fact that there’s some less than subtle product placement for Porsche cars which seems an odd bit of marketing for such prestige cars to children…..that’s a lot of pocket money to be saved.

At 99 mins it is slightly overlong having been padded out by unmemorable song and dance numbers which could easily have been cut. Playmobil the Movie will please kids with more rigid plastic on display here than there is in Katie Price / Jordan’s bedside drawer but unlike the Lego Movie there’s no gags for the parents who will be dragged along to see this but there’s enough to like to keep all ages watching.

Here’s the trailer for Playmobil – The Movie……..