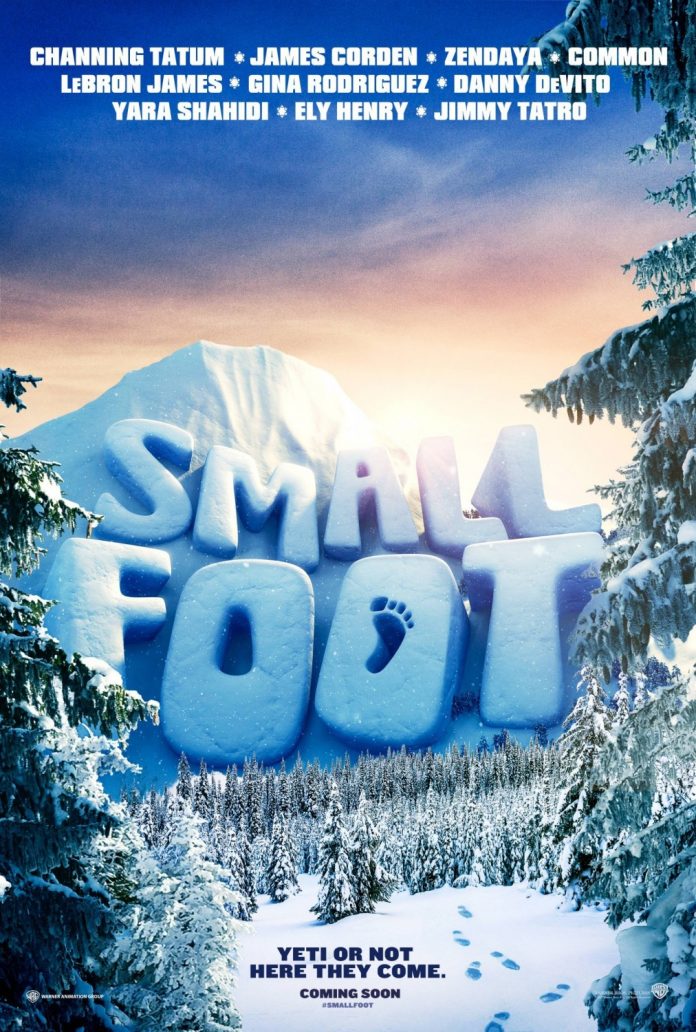 Most of us are aware of the saying about men having small feet……….. they have small shoes, at least that’s what our Editor keeps telling us (‘You’re fired!’ – Ed). Small Foot refers to the existence of mythical humans. Mythical because this is the perspective from which they are regarded by a mountain top populated by yeti’s.

Migo (Channing Tatum) is one of those yeti’s whose dream is to be one of the chosen amongst the male yeti’s to be fired across a chasm to hit a gong with his head for the rest of the population to hear as they work away to provide fuel for a system that is later found out to be not quite what they thought. It’s when Migo whilst practicing gong head butting that he comes into contact with a jet and in turn the fabled human or Small Foot. Desperate to prove their existence he tells the village only to find the human gone and his efforts disparaged.

But help is at hand when he comes across a group of yetis called the SES, the Smallfoot Evidentiary Society (thankfully not named the Smallfoot Human Intelligence Team)  who are only too keen to believe what he says that Migo and the SES go about trying to get below the mountains clouds to prove what he saw was real.

Though its musical numbers are largely forgettable it is only a rap by real life rapper Common, who voices Stonekeeper, as anywhere decent. In fact it’s a reminder outside of Eminem that few white people can rap none more so than James Cordon who, after this year’s Peter Rabbit, is back doing voices for animated feature which is better than him cropping up unexpectedly in a film ruining it for all as seen with Oceans 8.

Small Foot though is unexpectedly liberal and subversive with its none too subtle bashing of Biblical teachings which includes The 10 Commandments written on stone to Earth’s origins and is unnecessary especially in a film aimed at children. Inventively animated with some entertaining slapstick moments, frenetic action scenes, some clever jokes for the adults  and for kids its has monsters there’s little here not to appeal to a wide demographic.