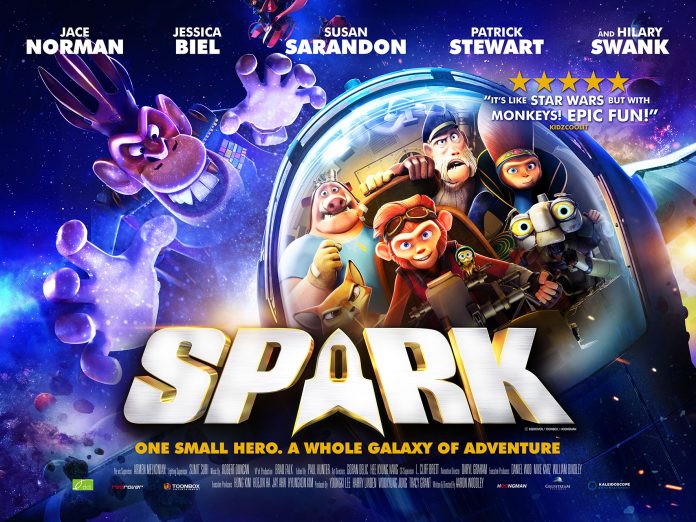 You can tell that half term is just round the corner when a glut of cheaply animated films appear and Spark fits the bill. Spark is a teenage monkey with his friends Chunk , a obese pig like techno expert who is clunkily nicknamed The Chunkinater a name that makes no sense whatsoever  and Vix, a vixen fox (ahhh I see how they got the name!) thankfully her name’s not Arsenal. They all live on a semi derelict lump of planet that was semi destroyed by a giant black hole and gigantic space prawn as instructed by a despotic space monkey tyrant called Zhong who has a fixation about his diminutive stature. It’ll come as no surprise that this may not be a true story. It’ll come as not a real shock either that Spark thinks he can save the galaxy possibly because he’s not a bright spark (see what we did there?). Having infiltrated the tyrannical monkey Zhong’s spaceship he quickly finds himself banished to a desolate planet where a load of other monkeys under the command of their Captain, who have also been banished, are there to assist him in overthrowing Zhong the mad monkey who is set to destroy further planets.

This is one of those films that like many others suffers massively because of the almost impossibly high standards set by each successive Pixar film and here it ranges from lack of detail in the animation (fur is just a block of colour) to some pretty bland characters and George Lucas may be knocking on the door for royalties with some obvious purloining of Star Wars mythological elements. The sidekicks are mostly feeble or pointless in their existence with some lame jokes which either go over the heads of its audience, notably one about Curious George, or doesn’t have the courage to be as risqué as it thinks with lines like, ‘Lets kick some Ass…teroids!’ The whole thing plays like the introductory films you get on video games except not quite as well animated.

It’s the sort of film that jobbing actors would justifiably gripe about because ever since Robin Williams star turn as the genie in Aladdin many animated films feel obliged to cast well known actors. Which is fine if your voice is as distinctive as Williams but here you have Jessica Biel, Hilary Swank, Susan Sarandon and perhaps worst of the whole lot is Patrick Stewart. Having been so good in Logan here he seems to be trying out his voice for Macbeth with a Scottish accent that travels all over Russia without ever visiting Scotland and he must be grateful that here he can hide behind his animated character.  Written and directed by Aaron Woodley with animation part done in Canada and the rest in the Far East this is disappointing as there are sequences that would have been ideally suited for 3D but presumably the budget wouldn’t stretch that far. This is perhaps better suited to home video but may keep younger kids occupied for its mercifully brief 91 minute running time.