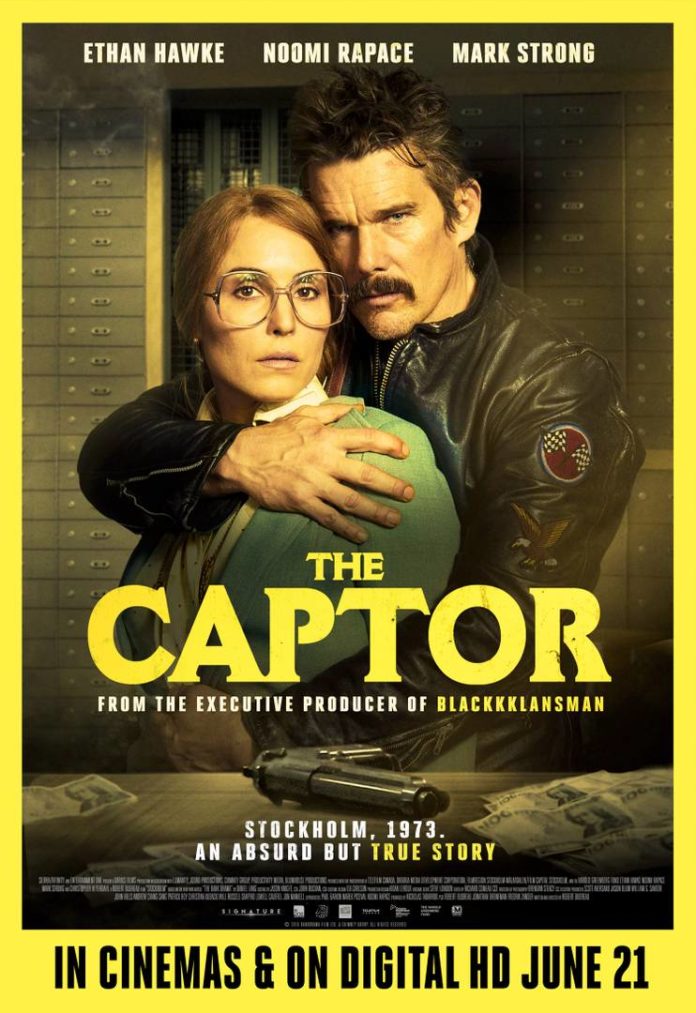 The Captor was originally titled ‘Stockholm’ for a couple of reasons.  It’s set in 1973 Stockholm and the film outlines the origin of the condition Stockholm Syndrome. It’s a term that is used regarding hostage situations where the hostages form a psychological relationship with their kidnapper in order to survive and in many ways its not dissimilar to finding yourself on a blind date with celebrity salad dodger Gemma Collins. Here though it’s Ethan Hawke as The Captor Kaj Hansson who walks  into a bank in order to rob it and takes Bianca Lind (Noomi Rapace) and the rest of the staff hostage. From the very start it’s a disaster with Bianca easily managing to set off the alarm with the police descending on mass on the bank in an operation orchestrated equally badly by a police detective.

To reveal what follows would be to spoil it because the siege careers from one disaster to the next and it’s not just Lars who is inept because the police officer is equally incapable  instigating a number of ludicrous plans to flush out Lars and his friend Gunnar played by Mark Strong who for once is not the heavy villainous role that we normal see him cast. It’s the developing relationship with Bianca staring to actively take part in the heist herself that is just one aspect of what makes the film so entertaining. The Captor is a series of escalating episodes of brinkmanship as each ups the ante with disastrous consequences with police negotiations only able to have got worse if Teresa May had been involved.

Directed by Robert Burreau this is one of those true life stories that is far more bizarre than any fictional narrative and there are some very funny lines in this with Ethan Hawke unstable and unbalanced in a role that’s very different from the one seen in last year’s ‘First Reformed‘ and the cast are uniformly good and running at a brief 92 minutes its a film that  skips along nicely with it being a wonder that anything like this could and did actually happen.