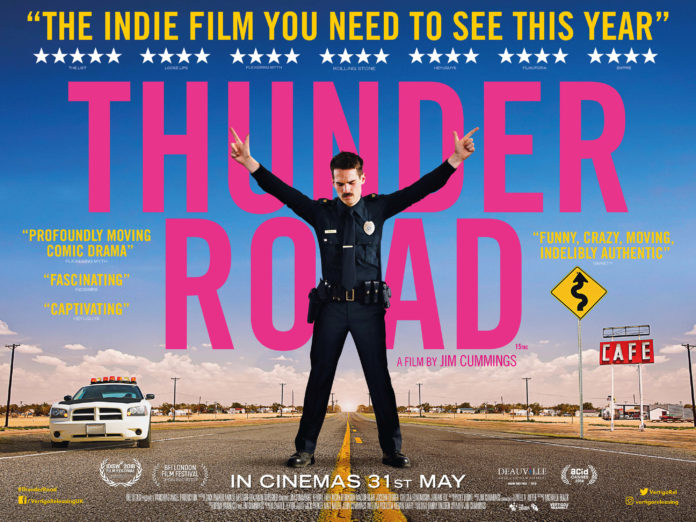 So we caught this way back last year and finally its getting a UK release so we’re happy to show you the Thunder Road trailer. A festival favourite, the THUNDER ROAD trailer is a darkly funny tale that follows the story of Jim Arnaud (Jim Cummings), a police officer who faces a personal breakdown following the death of his mother, a recent divorce and the struggles of trying to connect with his young daughter. The film has some very funny scenes but some heartbreaking ones too with his screen daughter which, for anyone who’s been deprived of seeing their daughter by a spiteful wife, will identify with.

The film announces Jim Cummings as a bright new comedic talent whose powerhouse performance takes audiences on a journey paved with outrageous comedy as well as truly heart-breaking moments. Also written, directed and produced by Cummings, the film is derived from his short film of the same name, which won the Grand Jury Prize at the 2016 Sundance Film Festival. Cummings was then inspired to launch a Kickstarter campaign to independently fund and then self-release the feature in the US.

Only costing a few hundred thousand dollars the film made back its money within its first week playing in just 67 cinemas in France where it was a sleeper hit. It’s already won a whole load of awards on the festival circuit for Best Film, Actor and Director The title is inspired by the Bruce Springsteen song and features in a very funny scene which features heavily in the 2016 short film version. Cummings has directed a load of short films but this is his first feature film as director having acted in quite a bit of TV of which probably most notable is The Handmaids Tale.