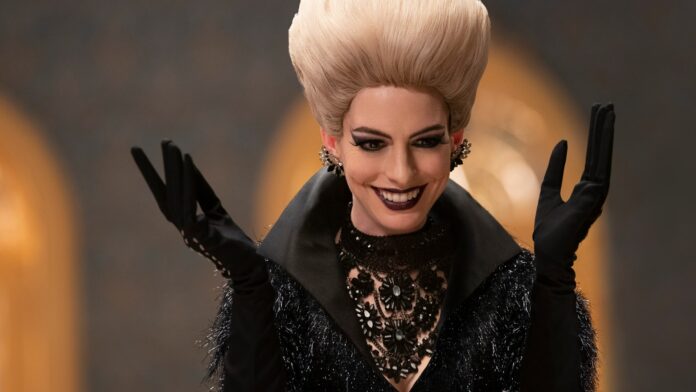 What we know about witches: They always wear gloves even when it’s hot outside. Their nostrils are larger than most. They all wear wigs to hide their bald heads. They don’t have any toes. They have elongated mouths that can stretch to their ears. They are pure evil. and they can be found on the panel of Loose Women. The 1990 version of the Witches had Angelica Huston on splendid form as the Grand High Witch revealing her true identity in scene to give kids nightmares in all its prosthetic glory. Thirty years later we also have the CGI and director Robert Zemeckis  having cast Anne Hathaway in the role was keen to combine the two technologies….so how did they go about turning Anne Hathaway into a Grand High Witch?

Developing a look for the Grand High Witch and her followers involved the combined efforts of costume designer Joanna Johnston and makeup & hair designers Peter Swords King and Paula Price. Johnston, a long time collaborator of Zemeckis’, was thrilled to work with him again, particularly on an iconic Roald Dahl story. “These witches were new to me and a great voyage of discovery to design for. I came to my own conclusion that they have very loose boundaries as to what they wear,” she says. “They live amongst us, as the story describes” and, despite their glamorous attire, “they absorb into life on first appearance in the film, but then evolve into something weirder as the story progresses.”

Together, the designers delved into the individual character of each of the 50 witches to determine every look they created, resulting in a striking and eclectic fusion of the late 1950s/early `60s.

Beginning with Hathaway’s character, Swords King says of his inspiration, “Her looks were based on iconic visions of the early 1960s, which included beehives and heavy eye make-up.” In keeping with Hathaway’s performance, Swords King could be quite daring with her look, referencing everyone from Jackie O to Marilyn Monroe to Mexico-born supermodel Nena von Schlebrügge, of Swedish and German ancestry, to Carmen Dell’Orefice, as influences. “The Grand High Witch has a selection of wigs based on ever increasing ideas of grandeur,” Swords King further states. “We start off with her looking fairly normal so as not to rouse too much attention or suspicion, but as we go on, the looks become more extreme. She becomes more maniacal and so does her appearance.

For Hathaway’s physical transformation, Price worked with prosthetic designer Kristyan Mallet on the day-to-day application, applying six different looks over the shoot, until the Grand High Witch appears very dark and quite demonic, with extremely heavy makeup using lots of black and very dark shades of purple. Even her wig was transformed via extreme backcombing, as Hathaway wanted the appearance of horns from the side. 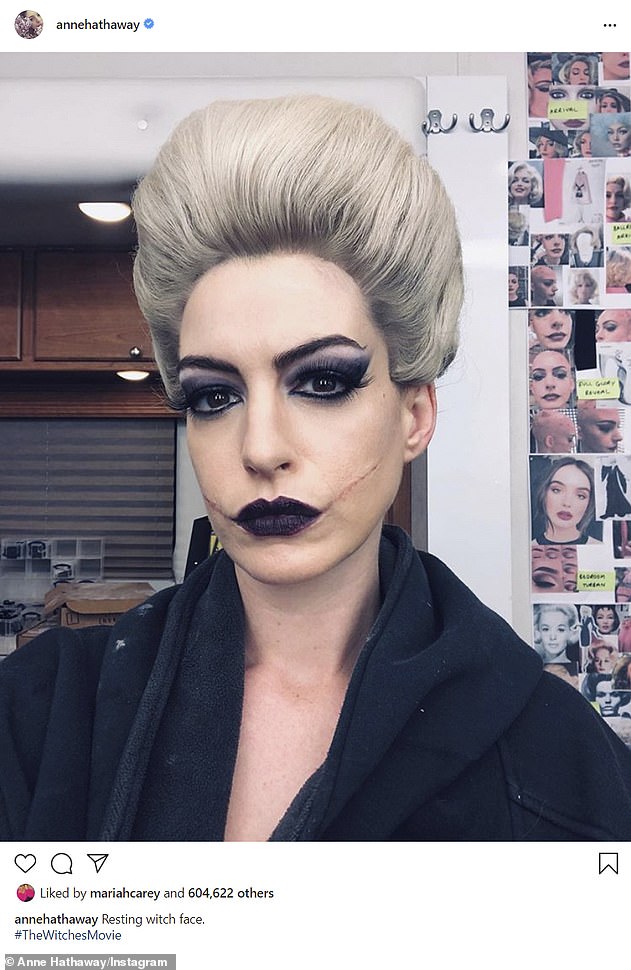 The process to get Hathaway ready for one of the looks without major prosthetics took approximately two hours, extending to a four-hour process when prosthetics were needed. After a few weeks of practice, the team was able to get the process down to three-and-a-half hours. Using transfer prosthetics enabled a very speedy application, essential given the character’s scars are visible—to some degree—at all times. The complete Grand High Witch look involved finger extensions on the thumb, little finger and index finger on both hands; blue finger socks were placed over the middle and ring finger, which would be digitally removed in post. Prosthetics were also applied to the back of her hands, to give the appearance that she only has three knuckles.

The Grand High Witch also has a veiny and scarred silicone bald cap, which went over a very tight hair wrap. Finally, Hathaway also had to have prosthetic feet in order to give the appearance of one very long middle toe. That piece had to be applied on set as it didn’t wear well travelling back and forth. In total Hathaway had 17 bald caps, 22 pairs of “back of hands,” 198 finger extensions and eight pairs of feet made and applied during the shoot. The remaining cast of witches followed suit but for the long middle toe prosthetic, as only the Grand High Witch’s would be seen. In total, the team made and applied some 62 bald caps, 20 pairs of feet, 80 back of hand prosthetics and 350 finger extensions throughout the shoot. In fact, the team took the locations department by surprise when they requested a “finger” tent specifically for the application of the fingers that would continuously slide off throughout the day…and were often found in the most unusual places.

The extraordinary work carried out every day by the hair & makeup and prosthetics teams was enhanced in post-production by the visual effect teams, led by Visual Effects Supervisor Keven Baillie. Via CG, the facial scars become a full Chelsea grin—a term used for a wound caused by making a cut from the corners of the mouth up to the ears, leaving a scar in the shape of a smile. VFX were of course also employed to enhance the witches’ appearance, to give them their extended digital grins, three-finger hands, long talon claws, and feet without toes, as well as the one big, long toe with a gnarly talon on the Grand High Witch.