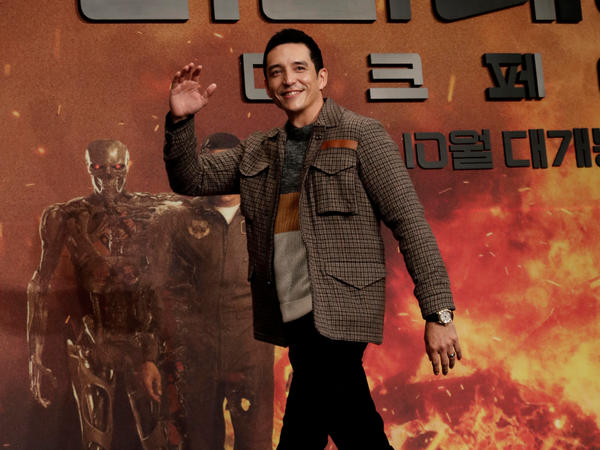 Having watched Terminator Dark Fate featuring a liquid metal cyborg from the future trying to kill Arnie, Linda Hamilton et al it’s somewhat unnerving to hear someone behind you in a swanky London hotel corridor say, “Hi there’ only for you to turn round and find yourself face to face with the same terminator from that movie albeit with a huge smile on his face. It is Gabriel Luna the actor chosen to play the Rev-9 terminator out on a killing mission in the latest in the franchise. ‘I’m Gabriel’ he says offering his handshake and inviting me to sit down. Friendly and affable and a world away from his on screen role in the film we talk about the film intended to reboot the franchise that has chosen to ignore T3,4 & 5 and instead picks up off the back of the second film.

AnyGoodFilms: Terminator Dark Fate is so much better than the fifth film

AGF: How did you land the role of RV-9 ? Did you have to audition?

Gabriel Lunaabriel Luna: Yeah, the process all started in December 2017  I got called in, somehow I found out it was for a new terminator film and these days studios are very secretive and really good at keeping things under wraps. As soon as I heard that I thought, ‘Hell yeah, I’m going for this. I’m gonna do my best!’

AGF: So what did you have to do?

Gabriel Luna: Well for the first audition it was a scene from ‘Collateral’ with Tom Cruise and Jamie Foxx and I’m reading there and they all me back for Tim and I did the same scene for Tim an in the script its the driver and assassin so there’s not much you can wean from that except that in my mind I don’t know many assassins in a Terminator movie apart from the Terminator himself. I didn’t know if that was the character at the time but it might be and then Mindy gave me more information that that was exactly what we’re trying to do so I find that  and then I went on vacation with my wife  but it’s all I could think about but then I got a text the week before I came back saying, ‘You’re in the mix they really enjoyed what you did!’ So I thought ‘Cool now all I have to do is try not to think about this’ and I’d gone house hunting right before the audition and I started that process as soon as I got back  so I’m doing all that I get a call saying, ‘Tim Miller wants you to come in and talk’ and then met the stunt team and do a stunt assessment  so that was a good sign and I was happy to do it  Meanwhile all this house hunting is still happening but it was a welcome respite from thinking about this movie and the potential of getting it or not but I did the stunt assessment and it went very well we had some friends who we worked with previously and it was cool because they’ asked me if I could do wires, green screen, motion capture and I could say ‘yes’ to all of that having played the Ghost Rider and all these other things. Then they had me meet with the Skydance Production team  and then they had me do a screen test because Jim  Cameron wanted me to test Tim said, ‘I think you’re my guy but Jim still wants you to screen test’. Jim said he built a whole jungle for a screen test which he had for Avatar and I was like, ‘Man I’m ready let’s do it’ but all the while I looking for a house because we’d been living in a one bedroom apartment in Hollywood for a long time and we’d been thinking about buying a house for a couple of years and I’m glad I had that to deal with because all the while I’d almost forgot I was in the mix for this dream role. So finally after I did the test they had ten days to decide and after then they asked for two more weeks and I thought well I’ve waited all this time what’s two more weeks but only a couple of days later I sat there  in my apartment alone looking over a grocery list my wife had texted me and I got the push notification  saying, ‘Congratulations, you’re the new Terminator!’ and I remember reading it and I’m so excited  but  wanted to tell everyone but I was all alone but I just went to get the groceries and it was just so great to have this secret as I’m  doing my shopping.

AGF: Now every new Terminator in a new film starts off naked in the first scene. How was that for you?

Gabriel LunaL:  Well it was my third time. I’d a film called Matador for Robert Rodriguez and at one point I’m being hazed by my team and I have to make it back to my little brothers party and I had to strip down and run down this stairwell in a hotel in Hollywood with in a hundred extras and I’m butt naked before I get tackled by cops but this is a far more iconic moment and that was Day One! We always joke that it’s the best way to introduce yourself to your crew.

AGF: So if that was awkward what was the most dangerous scene to film?

Gabriel Luna: For me maybe it’s just ignorance of the danger I don’t think I was ever afraid at any point. I guess the only thing that would be is  I used to be afraid of water when I was like five it wasn’t until I was 12 that I got over it and had a swim to try and overcome that fear  when I was in high school but still water  has never been my preferred environment  but this one required a lot of underwater combat when I’m attacking them  and this humvee and fighting Arnold at the bottom of this river. They built this 30 foot tank  in Budapest which they used for Blade Runner  and that’s the same one we utilize  so I go to the bottom and we had this really great stunt where I’m being drawn into the windshield which I’m beating on and that was really cool because I was under there for half an hour, an hour never surfacing just my dive buddy would bring me my air and  then go off and they call, ‘Action!’  You could hear everything because they had a speaker to give you your direction  and that was interesting because  there was a great fear when I was younger to stay there submerged in this environment  and have my diving buddy keep me alive  and just to stay calm It was pretty taxing I guess. AGF: You get to face off and fight Arnie. What was that like?

Gabriel Luna: Well I was thinking about that the whole time that’s why I was training my body to try and be a formidable foe and have the audience suspend their belief that I could face off to this guy. It was great because we became really close and friendly  I love him as a man and I think hes a wonderful dude. I kind of got to throw him around it was just great to be kind of eye to eye with someone you’ve admired your whole life

AGF: That sequence on the plane with him is with wire work?

Gabriel Luna: Yeah its wires  to achieve the zero gravity  and to achieve the rotation of the whole thing we were on this massive gimbel  that did a full 360 degrees for the fuselage so we got a lot of  moment s there  and we had a second unit do a lot of great stuff after we left . It was really cool. 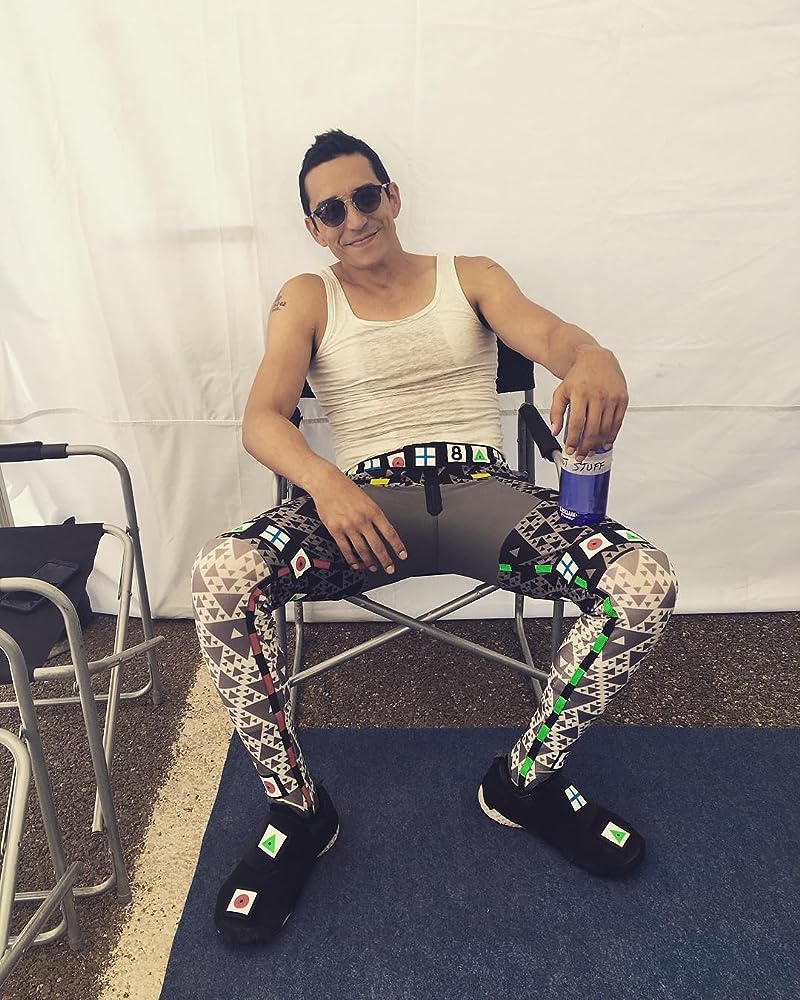 AGF: How badly injured did you get making the film?

Gabriel Luna: I broke a couple of ribs  at the end of the shoot I did the last month and a half with two fractured ribs  I didn’t even know they were fractured  they weren’t attached to the sternum  as I had no difficulty breathing  but it felt like a strained muscle  and my massseuse at the end of the week said, ‘Dude, it’s a muscle I think you need to go to the Doctor as it might be a fracture’. I don’t know how many milligrams of adrenaline I had to get through that whole week  but it was the week I was going to fight Arnold and I had my dialogue scene with him and everything so I thought I’m not missing this I’m not going to push this but we made it, we endured and made the movie

AGF: Are we going to see you in any future terminator films?