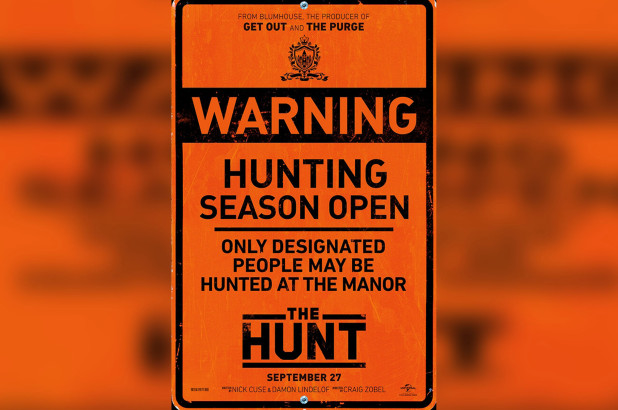 So if you’ve not heard the release of horror satire The Hunt is cancelled. Made by Blumhouse, masters of the low budget, big box office horror film The Hunt was to be released by Universal on September 27th 2019. The film is inspired by the superb 1932  black and white classic ‘The Most Dangerous Game’ based on Richard Connell’s novella but here the story begins when twelve strangers wake up in a clearing, they don’t know where they are, or how they got there. It turns out that a group of globalist elites has gathered for the very first time at a remote Manor House to hunt humans for sport. Their plan however is about to be derailed because one of the hunted, Crystal (Betty Gilpin), knows the game better than they do and turns the tables on the killers, picking them off, one by one, as she makes her way toward the mysterious woman (Hilary Swank) at the center of it all.

However all marketing was suddenly halted in the wake of three recent mass shootings in Ohio, Texas and California when a Universal statement said: “Out of sensitivity to the attention on the country’s recent shooting tragedies, Universal Pictures and the filmmakers of ‘The Hunt’ have temporarily paused its marketing campaign and are reviewing materials as we move forward.”

Two days later The Hunt is cancelled in no small part due also to conservative news outlets, spearheaded by Fox News, campaigning against the film for indulging in “sick murder fantasies about right-wingers” with the studio saying,’……we understand that now is not the right time to release this film.”

However there seems to have been behind-the-scenes conflict going on prior to this. In May 2018 the  Nick Cuse and Damon Lindelof’s script originally titled “Red State vs. Blue State,” was bought but many of the studio execs had reservations about it. But the film was still made but details of the script were kept secret and marketing materials had any overt political themes removed.  Two test screenings, the second just days after a trio of mass shootings in the U.S. had audience members apparently uncomfortable with the politics. But then Universal executives and the filmmakers began receiving death threats and the studio’s internal security force became involved but police wee not informed. Then Trump started tweeting about it on August 10th The Hunt is cancelled.

The studio was reluctant to cave in to people who hadn’t seen the finished film, but the mass shootings changed the game not making it worth the headache. However the studio have said, ‘The film was very well-received and tallied one of the highest test scores for an original Blumhouse film. Additionally, no audience members in attendance at the test screening expressed discomfort with any political discussion in the film.”

The Hunt has not been screened for critics and so the politics of the final cut remains conjecture. While the studio indicates The Hunt is cancelled it’s not clear if they will pass the film onto another distributor or streaming service.