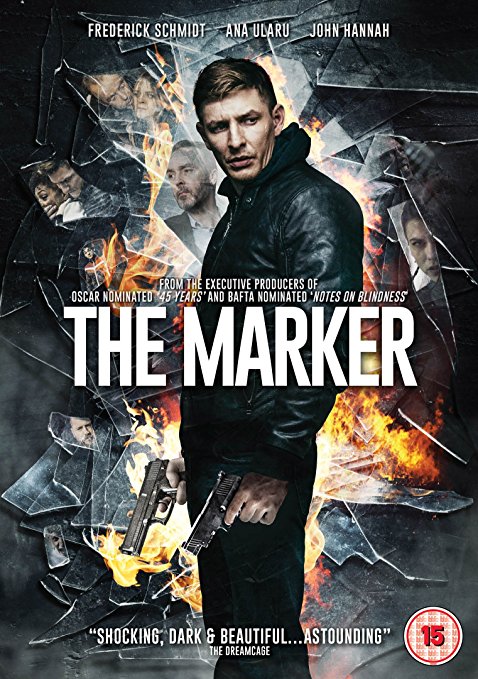 ‘Four Weddings and a Funeral’ had a plethora or good actors including John Hannah whose on screen persona has never been so different as the one he plays in ‘The Marker’ starring Frederick Schmidt (Starred Up, Snow in Paradise),Ana Ularu (Inferno), Jack McMullen (Common), Struan Rodger (Chariots of Fire, Kill List) Simon Lowe (Nowhere Boy, EastEnders), Cathy Tyson (Mona Lisa, Band of Gold), and directed by Justin Edgar (We Are The Freaks) it follows Marley Dean Jacobs who comes out of prison with one thing on this mind – to find and take care of the girl whose mother he killed during a botched job for gang boss Brendan Doyle. Haunted by the ghost of the dead woman, Marley’s noble intentions are hindered by Doyle trying to lure him back into a life of crime.

Reminiscent of Neil Jordan’s crime classic Mona Lisa, with a criminal trying to redeem himself after getting out of prison, and recalling the gritty, unnerving feel of Ben Wheatley’s cult hit Kill List (and featuring performances from brilliant Brit actors from both those films, Struan Rodger and Cathy Tyson), The Marker is a stunning, singularly dark excursion into the Birmingham criminal underworld that is not for the faint-hearted.

Frederick Schmidt – a Tom Hardy in the making – gives a superbly controlled performance as a man attempting to atone for his sins; while John Hannah, fondly remembered for his role in Four Weddings and a Funeral, quickly obliterates all memories of that film as Schmidt’s blisteringly vicious nemesis. Writer director Justin Edgar keeps a tight hold on proceedings as Schmidt’s plans to make amends starts to unravel, imbuing the film with a palpable, discomforting sense of dread and menace, and ramping up the tension to deliver a powerful, violent and hard-to-take-your-eyes-off thriller.

John Hannah co starred with Brendan Fraser in which 1999 reboot about a classic Universal studios monster?

a) The Invisible Man