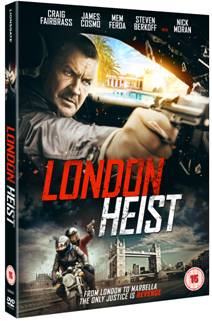 These days it does seem obligatory that most modern British crime flicks have psychotically deranged men incapable of having a conversation without flying off the handle at just about anything. Frankly it’s not dissimilar to working with our Editor (‘You’re *”#~@+! fired! You  “^*+#@! slaaaaaaaag! – Ed) and ‘London Heist’ is no different in that respect.

Craig Fairbrass (The Bank Job, Rise Of The Footsoldier) is Jack Cregan, career criminal, family man and vicious armed robber, on a mission for revenge following his father’s brutal murder. The shattering revelations that follow force Jack to pull off one last dangerous robbery on his way to exacting a brutal revenge on all those involved.

Directed by the BAFTA-nominated Mark McQueen, LONDON HEIST is a gripping revenge thriller set against the backdrop of the gritty streets of London and the hedonistic glamour of Spain’s seductive Costa Del Sol.  With a supporting cast that also includes James Cosmo (TV’s Game of Thrones) Steven Berkoff (The Krays), Nick Moran (Lock, Stock and Two Smoking Barrels) and Roland Manookian (The Business).

Here’s a chance to win a copy of the film just by answering the following question.

Which 1993 Sylvester Stallone action film did Craig Fairbrass appear in as a villain after a load of money packed suitcases up a snowy mountain?

London Heist is out on DVD and digital download on July 17th, 2017