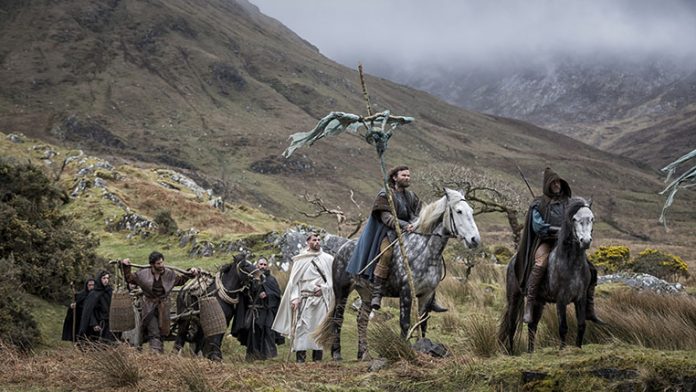 In terms of pilgrimages you have Lourdes, the Hajj  and let’s not forget the Editors daily if not hourly pilgrimage to The Nags Head. However this week’s competition is set in Ireland, 1209. An island on the edge of the world. A small group of monks begin a reluctant pilgrimage across an island torn between centuries of tribal warfare and the growing power of Norman invaders. Escorting their monastery’s holiest relic to Rome, the monks’ progress is seen through the eyes of a pious young novice (played by Holland) and a mute lay-brother (Jon Bernthal – The Wolf of Wall Street, The Walking Dead, The Punisher), who form an unlikely partnership to lead the quest after their group is ambushed leaving only them left alive. As the true material, political and religious significance of the bejewelled relic becomes dangerously apparent, their path to the East coast becomes increasingly fraught with danger – not least from enemies, including Sir Raymond de Merville (Richard Armitage – The Hobbit trilogy, Captain America: The First Avenger), determined to thwart their progress. The monks belatedly realise that in this wild land of ancient superstitions, the faith that binds them together may ultimately lead to their destruction.

Shot predominantly amongst the awe-inspiring backdrop of Connemara on the West coast of Ireland, Pilgrimage is an edge of your seat epic combining blood splattering, sword wielding action with powerful emotional depth, as the men strive to complete their treacherous journey alive, whilst their faith and loyalty to one another are tested to the limit.

Which Superhero film does Tom Holland star in the lead role?