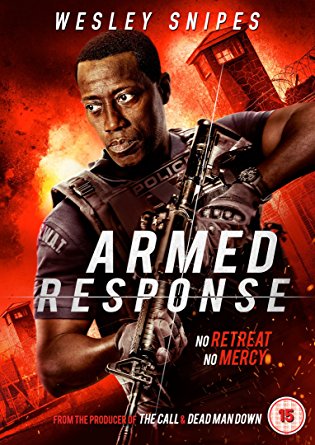 Wesley Snipes has not had the easiest time over the past few years bit he’s always been a decent enough action star and this weeks film ‘Armed Response’ proves just that.

Here he stars alongside WWE superstar Seth Rollins and rock legend Gene Simmons where a team of Special Forces experts led by Isaac (Snipes) investigate a high-tech military compound known as The Temple. When they discover an earlier military team who have been horrifically slaughtered in the deserted facility, the mission suddenly changes focus to survival by any means necessary, as it becomes clear they are not alone…….

Here’s your chance to win a copy just by answering the following question:

Which film trilogy did he star in as a sword swinging vampire?