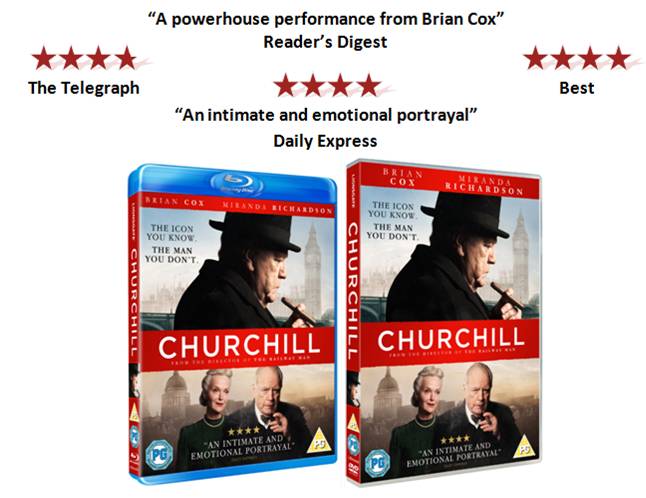 With the dawn of the half witted reality TV star proving a depressing down turn in the evolutionary scale its reassuring to know that once we had truly great Britons such as Winston Churchill who wrestled with decisions that had potential disastrous consequences as opposed to the reality TV stars who you wouldn’t trust to sit the right way round on a lavatory.

This week you can win a copy of ‘‘Churchill’ where Brian Cox (Zodiac, Braveheart) delivers the powerhouse performance of his career, providing an intimate portrayal of the British Prime Minister during the breathtaking 96 hours before the World War II invasion of Normandy. In June 1944, four years after the evacuation of Dunkirk, Winston Churchill finalises plans for the largest amphibian invasion known to man: D-Day. With time ticking and the horror of lives wasted in past battles weighing heavily on his shoulders, we see Churchill in his most urgent moment. Exhausted by years of war and plagued with the fear of repeating the mistakes that led to the disastrous Gallipoli campaign in WWI, Churchill must draw power from his unflinchingly loyal wife Clemmie, (impeccably portrayed by Miranda Richardson – Sleepy Hollow, The Young Victoria), and lead his nation into battle once again.

With a screenplay by historian Alex von Tunzelmannm, director Jonathan Teplitzky (The Railway Man, Burning Man) has provided the most absorbing, intimate insight into the life of this nation’s greatest leader to date.

Before Anthony Hopkins Brian Cox was the first actor to play serial killer Hannibal Lector in which film?

a) Silence of the Lambs