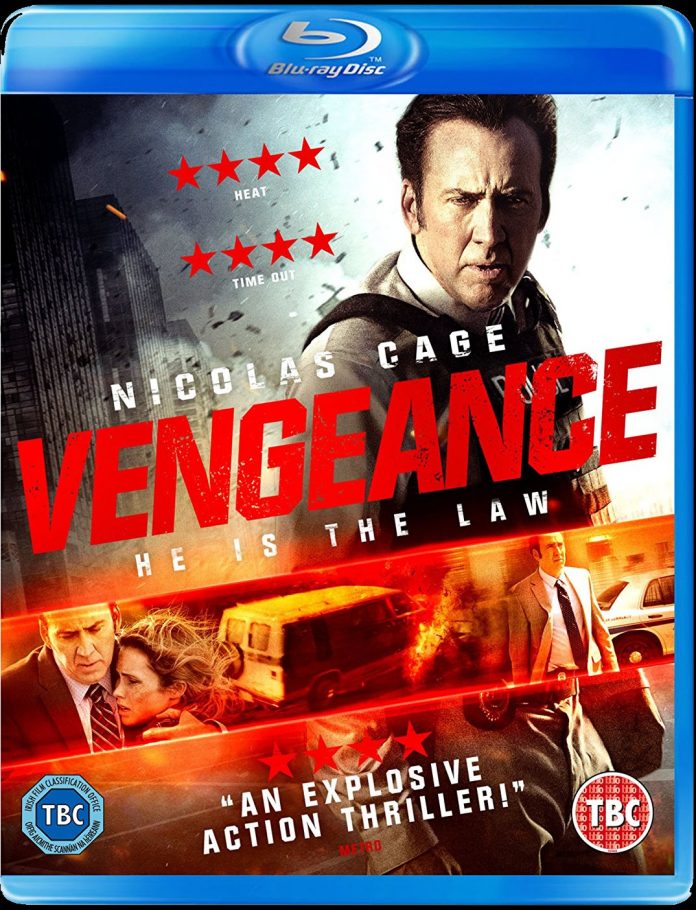 He’s mad, he’s bad, He’s Nicolas Cage. Yes, baton down the hatches because bonkers barmy Nutty Nicolas Cage is back with his latest OTT fest. In fairness he seems to have toned it down a fair bit for this revenge drama called …um…..’Vengeance’ where he goes a roaring rampage of revenge.

Niagra Falls police detective and Iraq war veteran John Dromoor (Nicolas Cage) is flagged down by a 12 year old girl after she witnesses her mother, Teena, being brutally attacked and left for dead by a group of local men. When the men are caught, their parents hire slick criminal defence attorney Jay Kirkpatrick, (Don Johnson – Django Unchained) who puts the focus on Teena s credibility, based on her sobriety and promiscuity. Shockingly her assailants are exonerated and released, even though the daughter’s testimony should have alone been enough for a certain conviction. In the aftermath of the verdict Dromoor grows increasingly close to the victim and her family, who he then discovers are being taunted and stalked by the freed men. The injustice becomes too much for him to take and fuelled by a sense of vengeance and his own personal demons, Dromoor sets out on a lone campaign to serve the justice the men deserve.

So here’s your chance to win a copy of the film just by answering the following question:

Which Michael Winner film had Charles Bronson as a vigilante shooting muggers in New York at night?