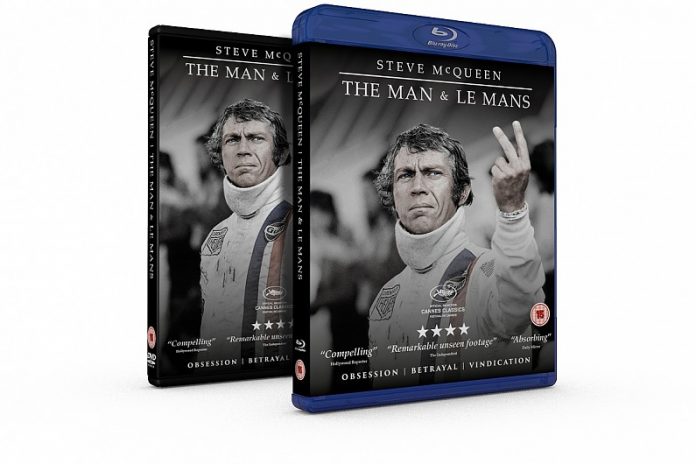 Despite having died almost 40 years ago Steve McQueen is still an icon of cool and had made his name in The Magnificent Seven, The Great Escape and The Thomas Crown Affair. But it was his role as the ‘maverick cop’ in Bullitt – the film that made car chases a staple of the movie industry – that transformed McQueen into Hollywood’s golden boy by the end of the 1960s. Now he was rich enough and powerful enough to make ‘Le Mans’ – the movie that had been his passion for decades.

STEVE MCQUEEN: THE MAN & LE MANS was one of only two British films to receive an Official Selection for the 2015 Cannes Film Festival. Now, Noah Media Group is delighted to announce this gripping, emotional documentary will be available on Amazon, iTunes, Google Play, Blu-ray and DVD from 5th June 2017.

If acting was his calling, McQueen’s first love was racing. But to him it was more than just a hobby. It was an art form. Speed offered an escape. Racing became an addiction that led to his obsession to make ‘the ultimate racing picture’.

In 1970, the world famous 24-hour Race at Le Mans in France was the greatest test of a driver’s skill and courage. This legendary sporting challenge would be the inspiration and location for McQueen’s vision. He wanted to capture for the first time not just the thrill and very real danger of racing but its addictive pull on the human spirit.

McQueen’s run of hit films and his starring role in the project persuaded the studios that ‘Le Mans’ would be a sure-fire hit. The legendary director John Sturges (The Great Escape, The Magnificent Seven) would oversee a hugely ambitious production backed by the best technical team ever assembled and 45 of the world’s most famous racing drivers.  McQueen was attempting to break new cinematic ground. However,  in his search for perfection he would fly too close to the sun……

STEVE McQUEEN: THE MAN & LE MANS tells the incredible true story of how one of the most charismatic movie stars of all time risked his life and the lives of those closest to him; how he ruined friendships, his marriage and put his career at risk – all in the pursuit of his one dream.

Here’s your chance to win  a copy of this great documentary just by answering the following question:

Which of the following films did he star in with Paul Newman?

b) Butch Cassidy and the Sundance Kid