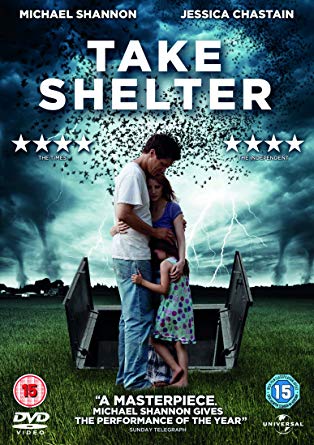 ‘Take Shelter!’ was usually the warning from the police whenever presenter Ant McPartlin decided to drive home from the pub. Here though Take Shelter is a film starring Hollywood favourites Michael Shannon (The Shape of Water)and Jessica Chastain star in a highly acclaimed, mesmerising psychological thriller.

Curtis LaForche (Shannon) lives a contented family life in a small Ohio town with his wife Samantha (Chastain)  and their  six-year-old daughter Hannah (Tova Stewart). When he begins to have recurring nightmares of an impending apocalyptic storm he questions his sanity but prepares for the worst by building a storm shelter. As he becomes increasingly plagued by visions his behaviour grows ever more erratic, alienating friends and putting his livelihood and marriage in jeopardy. Are his visions premonitions or is Curtis losing his mind?

Directed by Jeff Nichols (Midnight Special) Take Shelter is a gripping, edge of seat drama earned plaudits galore on its cinema release and now arrives in stunning high definition, with new and archive special features, including cast interviews and a brand new director interview. Take Shelter will be presented in limited edition packaging and includes a stunning collector’s 40-page perfect bound book and will be available from 3 September 2018.

With its astounding atmosphere of impending doom and powerhouse performances Take Shelter is one of the most compelling thrillers of recent times.

a) The Shape of Water

Here’s the trailer for Take Shelter…….

Could Wonder Woman be an Oscar contender…….?