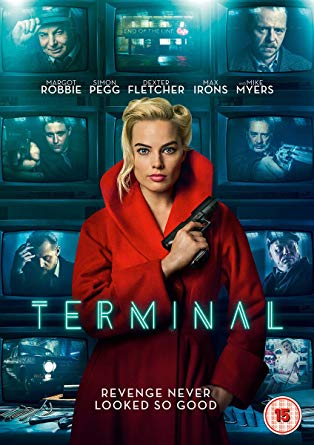 Much as our Deputy Editor wishes his ex-wife had something terminal it’s also the title of the directorial feature debut of Vaughn Stein and is a co-production between Margot Robbie’s LuckyChap Entertainment (I,Tonya) and BeaglePug Films (Cinderella).

Terminal is set in the dark heart of a sprawling, anonymous city and follows the twisting tales of two assassins carrying out a sinister mission (Max Irons & Dexter Fletcher), a teacher battling a fatal illness (Simon Pegg), an enigmatic janitor (Mike Myers) and a curious waitress leading a dangerous double life (Margot Robbie).

Murderous consequences unravel in the dead of night as their lives all intertwine at the hands of a mysterious criminal mastermind hell-bent on revenge. Revenge Never Looked So Good…

Stein had worked for some years as an assistant director on films as varied as World War Z and Dad’s Army and equally for Robbie this was only the second film she has produced after I Tonya. But this has a decent cast of actors with the most notable being Mike Myers who has all but retired from films having never really recovered from the lambasting he took with the appalling The Love Guru but this looks like the beginning of a comeback with a role in the forthcoming Queen bio-pic Bohemian Rhapsody.

You can win one of TWO copies of Terminal just by answering the following question:

For which film was Margot Robbie Oscar nominated as best actress?

b) The Wolf of Wall Street

Here’s the trailer for Terminal…….