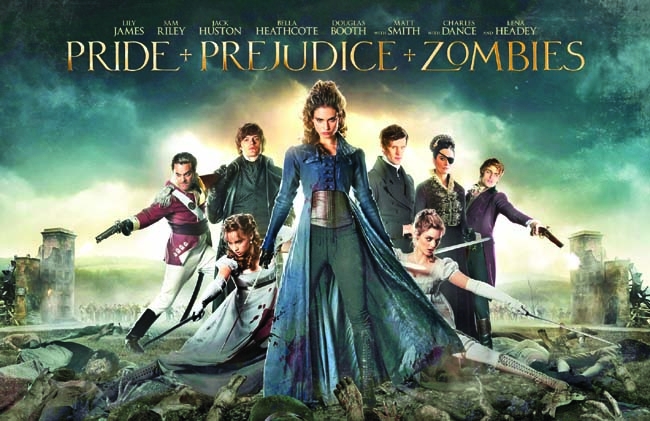 Many titles of classic novels lend themselves to other genres –  Cold Comfort Farm  (animals trying to keep warm in the winter?),  The Wind in the Willows (flatulence in a forest?) and the less said about ‘Of Human Bondage’ the better. Apart from maybe Beowolf & Frankenstein classic English literature has always been missing monsters and this week’s new release ‘Pride and Prejudice and Zombies’ fills in what Jane Austen overlooked – the brain dead (or Big Brother contestants as they’re also known)

Monster mash ups are very much of the day or least have been for a decade or so and the Jane Austen novel  is pretty well known from numerous TV adaptations and with the story set in the 19th century it follows the initial resentment between Elizabeth Bennet and Mr Darcy memorably setting housewives hearts a flutter when Colin Firth in the BBC adaptation emerged from a lake in a 19th century version of a wet T shirt competition which oddly has been missed from this version. Here instead we have a steely eyed Sam Riley looking like a sober, drug free Pete Doherty in the titular role. So when a mysterious plague has fallen upon 19th century England, the land is overrun with the undead and feisty heroine Elizabeth Bennet (Lily James) is a master of martial arts and weaponry.

Casting aside personal and social prejudices, Elizabeth and Mr. Darcy (Sam Riley) must unite on the blood-soaked battlefield to rid the country of the zombie menace and discover their true love for one another.

This is rattling good fun with some quirkily gruesome moments in a horror comedy.

We’ve got a chance for you to win a copy and all you have to do is answer the following question:

c)Send your answer with your name & address to : competitions @anygoodfilms.com