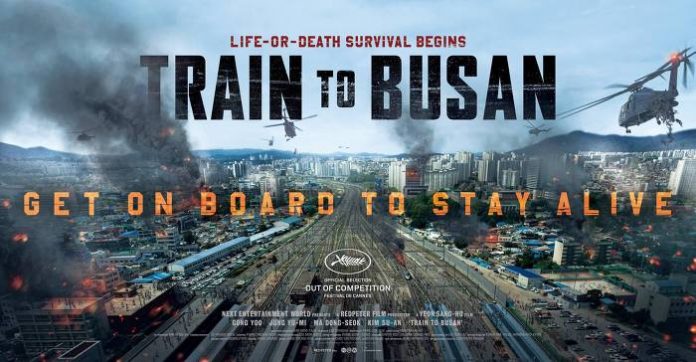 In many ways the zombie and our Editor have little in common. One shuffles around, brain dead, moaning the other is a fictional corpse bought back to life (You’re fired! – Ed).

Train to Busan is a another great horror film from South Korea and follows  A father and daughter fighting for their lives on a train full of the undead in this sensational blockbuster that has been hailed as one of the best zombie film ever made – a truly astounding, action-packed thrill-ride with social bite, an unexpected emotional punch, and a carriage-load of first class action.

A mysterious viral outbreak pushes Korea into a state of emergency. The government declares martial law just as divorced Seok-woo and his daughter catch the KTX bullet train from Seoul to Busan to see her mother. But someone on the journey has been recently infected sending the hurtling carriages into complete chaos. As the living dead transform the voyage into a nightmare excursion, father and daughter and a small group of uninfected passengers must fight for survival. Get on board to stay alive!

TRAIN TO BUSAN, the action debut from Korean animator Yeon Sang-ho has got the lot – white-knuckle tension, superbly choreographed action set pieces, and production values that would shame a Hollywood production – in short, it’s “pretty much everything you could possibly want a zombie film to be” (The Telegraph) As well as being hailed as one of the best zombie films ever made, at its core, TRAIN TO BUSAN has a real heart, with the central relationship between a workaholic dad and his estranged daughter (Yoo Gong and Soo-an Kim) giving the film a powerful emotional punch. There is also a magnificent ensemble cast making up the passengers trapped on the Busan train, including a pair of young lovers, two elderly sisters, and, in a stand-out role, Ma Dong-seok as a man who will do anything to protect his pregnant wife.

TRAIN TO BUSAN also features one of cinema’s most diabolical villains, in the form of a businessman far nastier than any of the zombies, whose appalling antics have to be seen to be believed and will you have you shouting at the screen in disbelief.

TRAIN TO BUSAN has broken box office records across Asia and enjoyed fantastic critical acclaim since premiering at Cannes Film Festival’s Midnight Screening. It closed London’s Horror Channel FrightFest, with many declaring it the best film of the festival. And no less an authority than Kick-Ass, X-Men andKingsman scripter Jane Goldman suggests it is a “genre-defining masterpiece”.

With the maddest zombies ever seen onscreen and the heart-stopping ending that comes out of nowhere, TRAIN TO BUSAN is a “viciously entertaining ride” (SciFiNow) that will dazzle the most seen-it-all film fan. If you didn’t catch it at the cinema, now’s your chance to jump onboard this horror express!

★ Making of Train to Busan

Here’s a chance to win a copy of the film just by answering the following question:

Which 2013 Brad Pitt film featured the world being overrun by zombies?