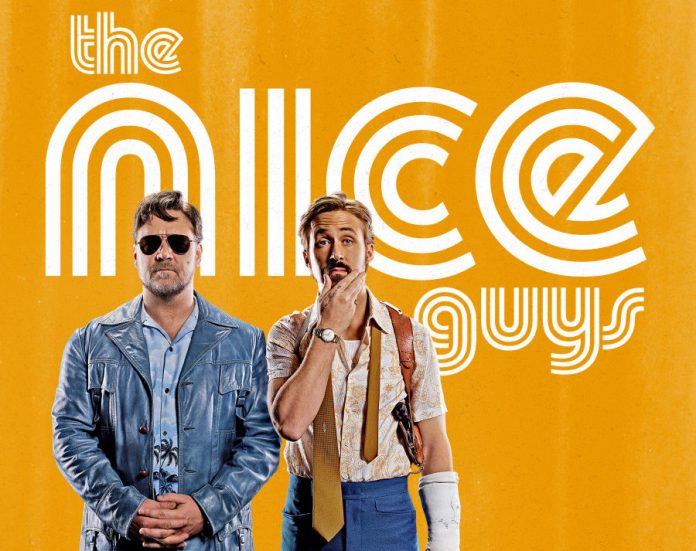 Holland March (Ryan Gosling – The Big Short, La La Land) is a wise-cracking, down-on-his-luck private eye in 1977 Los Angeles, and a useless single parent to sweet and sassy daughter, Holly, who takes care of him. Jackson Healy (Russell Crowe – Gladiator, LA Confidential) is a hired enforcer and debt collector who hurts people for a living. Fate turns them into unlikely partners after a young woman named Amelia (Margaret Qualley – TV’s The Leftovers) mysteriously disappears following the production of her ‘experimental artistic film’. Healy and March soon learn the hard way that some dangerous people are also looking for Amelia, and anyone else who gets involved in the case seems to be winding up dead. Before they know it, their investigation escalates into pandemonium, with dead bodies, wild parties and gun-toting car chases galore.

From the producer (Joel Silver) that brought you Lethal Weapon, The Matrix and Predator and genius director Shane Black (Lethal Weapon, Iron Man 3, The Predator) comes the most unlikely of comedic duos in a film that flaunts as much exhilarating action and slap-stick comedy as it does banter and wit. Complemented by an unforgettably funny breakout performance from newcomer Angourie Rice (Spider-man: Homecoming), THE NICE GUYS has a distinctively unique comedy with Crowe & Gosling making an especially good comic pairing.

This is a fantastically funny film in typical Shane Black style and on our YouTube channel you can see them introduce the film at the London premiere.

So here’s your chance to win a copy of the film by answering the following question:

For which film did Russell Crowe win an Oscar as actor Actor?

b) A Beautiful Mind