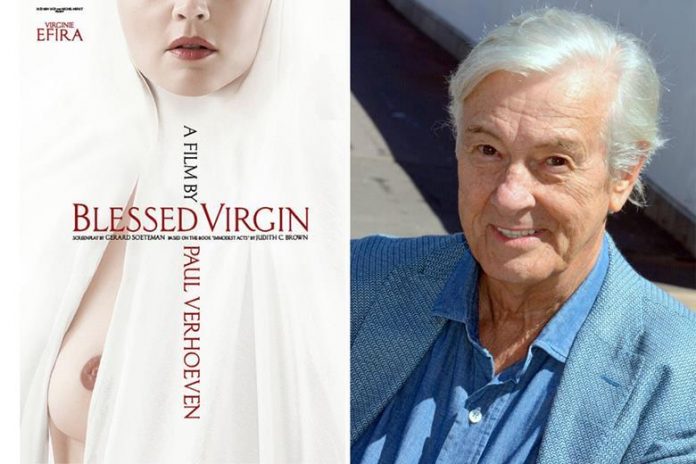 We’ve always been fans of Dutch director Paul Verhoeven with his stint in Hollywood producing some great yet controversial films. From 1986 to 2000 he gave us Robocop, Total Recall, Basic Instinct, Showgirls, Starship Troopers and Hollow Man. Not a bad run of movies by any standard and all with something for everyone…….yes even Showgirls in all its its sordid tawdry glory.

Having made such an impact with sex & violence most of Paul Verhoeven’s films were liberally sprinkled with satire notably the adverts in Robocop & Starship Troopers but Hollywood became to restrictive for the auteur.

Having returned to Europe he made more adult themed films like Black Books and the extremely controversial rape drama Elle. Well its seems that he just can’t resist baiting the censors as his next film an adaption of Judith C. Brown’s academic work Immodest Acts: The Life Of A Lesbian Nun In Renaissance Italy.

The clue is in the title we guess but its about the controversial 17th century abbess Benedetta Carlini. It will star Virginie Efira – who played a devout Catholic wife in Elle – as the naughty nun. The rest of casting is still in progress.

So what will Paul Verhoeven’s filth fest be about? Having entered a convent in the Tuscan town of Pescia as a child, Carlini rose-up the ranks. Propelled by her claims of a series of lurid mystic visions and the appearance of stigmata on her body she was later ostracised. Yet after an investigation by the church her claims were discredited as an utter sham. The church then went on to uncover further evidence of affairs with other nuns in the convent.

Quite how true this is has been the subject of debate by academics ever since regarding the true reasons for her downfall.

The International sales pitch for the film begins in Cannes 2018 and will be released in France in 2019.