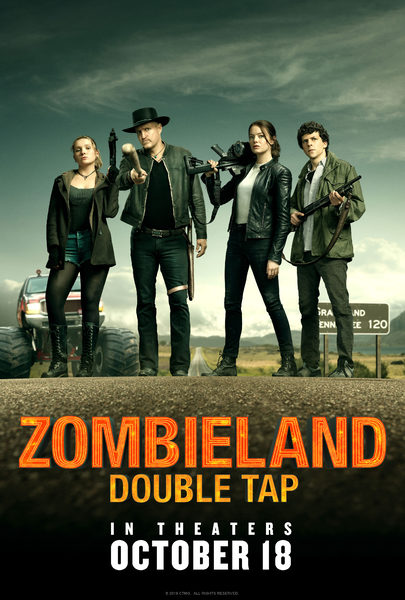 Landing in our mailbox is the Zombieland Double Tap trailer and is another film to add to the delayed sequel file with the original having been released back in 2009 which garnered decent reviews and gained cult success and earned over $100m at the worldwide box office. The new film features the return of stars Woody Harrelson, Jesse Eisenberg, Emma Stone and Abigail Breslin who have each gone on to various successes most notably Stone now being an Oscar winner. This time they are Joined in the sequel by Thomas Middleditch, Zoey Deutch, Rosario Dawson and Luke Wilson. As for Bill Murray who made such a great appearance in the original it looks like he’s back for this one playing himself again. From the cast list it looks like he’s not the only one with his fellow Ghostbuster Dan Ayckroyd also appearing but this time as himself. Zombieland Double Tap trailer features more comic mayhem that stretches from the White House and through the heartland, the four slayers Columbus, Tallahasse, Wichita, and Little Rock move to the American heartland as they face off against evolved zombies, fellow survivors, and the growing pains of the snarky makeshift family as well as some new human survivors. If you’re wondering why this has not been titled Zombieland 2 well fans of the original film will know that the Zombieland Double Tap trailer refers to Rule Two stated in the first film and we won’t spoil it for you as the trailer looks very good although probably not suitable for watching in the work space.

Zombieland Double Tap opens in the UK an USA on October 18th 2019.