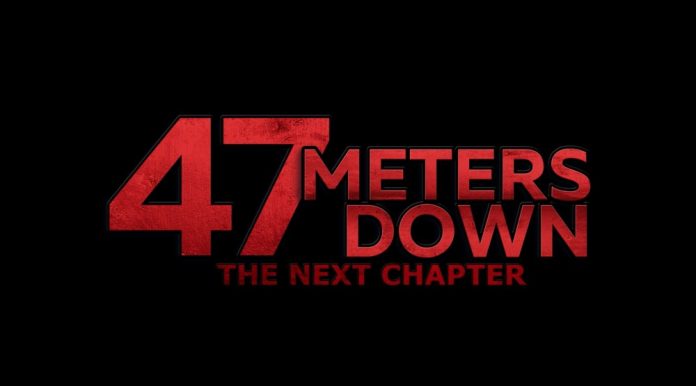 With The Meg now opening nationwide the temptation was obviously too great to resist for the makers not to release the 47 Metres Down The Next Chapter trailer set for summer 2019.

The original film released in summer 2017 was a low budget break out hit that rode the tail of 2016’s The Shallows and both were huge successes at the box office. Shark movies are definitely back in vogue and writer director Johannes Roberts returns in the same capacity having co-written the sequel with Ernest Rierra again. Rierra has worked on the last few films of Roberts starting with The Other Side of the Door in 2016. Roberts himself has been making films since 2001 with Sanitarium and has bought out a film almost every alternate year. He’s had cast some pretty eclectic people in his films too including Darren Day and Tom Savini and his preferred horror genre has bought some decent shocks and scares to several of his films as sen in last years belated ‘The Strangers : Prey at Night’ sequel.

Most have been low budget and 47 Metres Down was his first film to get proper box office success.

The 47 Metres Down The Next Chapter trailer was originally going to be called 48 Metres Down but that’s all been changed. So what can we expect? Well from the 47 Metres Down The Next Chapter trailer it appears that the film has relocated from Mexico to Brazil and has five back packers diving into a ruined underwater city. So with five characters you know some of them are going to be shark food. There’s no details at all as to who it will star and the trailer features a fair bit of footage from the last film.

Then film will be released in the US on 28th June 2019. No date announced yet for the UK release.

Here’s the 47 Metres Down The Next Chapter trailer…….

How does Will Smith career recover from that assault on Chris...