Having watched the Alita Battle Angel blu ray it would be hard to imagine James Cameron making low key, working class, kitchen sink dramas….so he doesn’t.  After Titanic in 1997 he had turned his hand to making documentaries for a few years but his adaptation of Manga novel Alita Battle Angel was to be his next film and having written a 180 page script for it and having hit a creative wall he put it to one side and turned his attention to Avatar.

Based on the Gunnm  Manga comic Alita had been a supporting figure in another strip by artist Yukito Kishiro and when it was suggested by his Editor that he develop the character Alita came into being garnering a huge number of fans in the process of which Guillermo del Toro was one who bought it to Cameron’s attention.  Working on the script with Laeta Kalogridis who had worked on Scorsese’s Shutter Island they condensed the novels into one story about a deactivated cyborg Alita (Rosa Salazar) being discovered in a scrap heap by a cyborg engineer Dr Ido (Christoph Waltz) and restored to her former glory except that he’s unable to remember anything of her former life and sets out to find out just who she is where she finds herself pitted against a variety of other brutal cyborgs out to get her for reasons she is yet to discover. 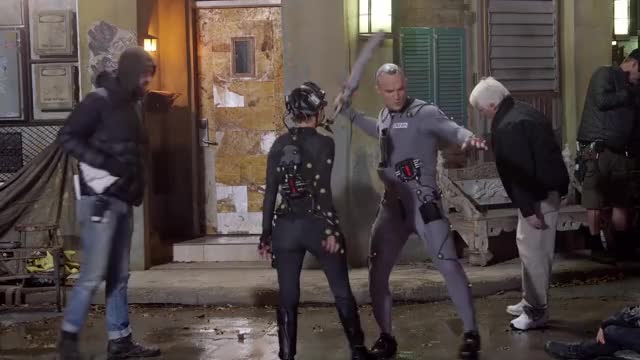 The film was announced way back in 2003 but was put aside for Cameron to focus on Avatar and it was only when Robert Rodriguez asked about what had happened to the film that Cameron, knowing that Avatar and its numerous intended sequels meant that he was unlikely to make it for years if ever and so he offered the script to Rodriguez to work on which he did paring it down to 120 pages losing nothing that Cameron had intended and getting 20th Century Fox to greenlit what would be  a $170m film , the biggest budgeted film Rodriguez has ever worked on.

By the time of shooting technology had caught up with the vision Cameron originally had and the film was shot as Rodriguez Troublemaker Studios in Austen Texas shooting for four months from October 2017. It’s release date was pushed back several times and ultimately turned out to be the last film 20th Century Fox would distribute as a solo studio before the Disney takeover.

We interviewed producer Jon Landau and Robert Rodriguez here just before Christmas 2018 about the film as the release of Alita. When it was released in February 2019 reviews were mixed but on second viewing there’s far more to it and the Alita Battle Angel Blu ray has an extensive array of bonus extras that goes into much of the background an behind the scenes.  There are over two hours of features here that takes in featurettes about Alita’s world, her background and the rules of motorball  to frankly more existential  musings such as What is a Cyborg?

The Alita Battle Angel Blu ray has a number of other featurettes on artist Kashiro  and the evolution of Alita from his novels to how she is presented in the film  to a London Q & A hosted by producer Jon Landau with Cameron , Rodriguez and the main cast. Now what is very obviously missing from the blu ray is a commentary  but the featurettes are so extensive and detailed that there can’t have been much more for them to have talked about the film and there’s little here that’s left uncovered and the bu ray is the completist’s preference.