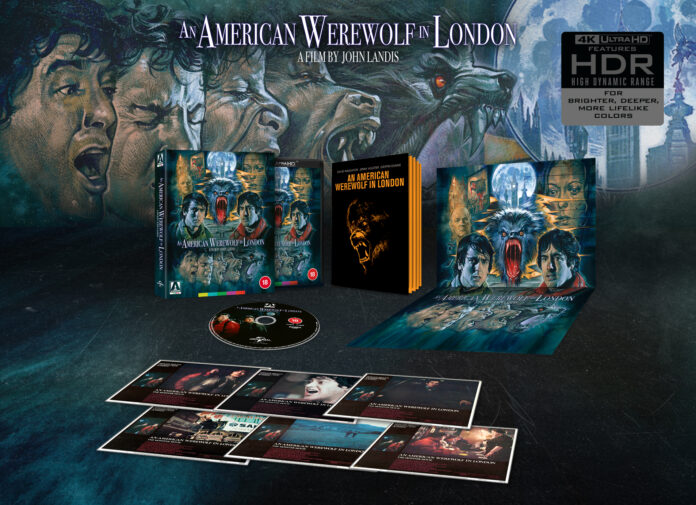 There’s something infectiously enjoyable about the glee with which John Landis approaches his films. His debut feature Schlock (reviewed HERE) was a low budget comedy that saw him pair up with what would be the fledgling genius of make up effects man Rick Baker. Landis would go on to prove adept at sketch comedy with Kentucky Fried Movie and hit pay dirt with the frat house comedy Animal House and the musical cult comedy The Blues Brothers. The common thread with whatever genre he helmed would be comedy and his next would be the ambitious horror film, An American Werewolf in London. It was based on a script he’d been developing since he had started work as a production assistant on Kelly’s Heroes in Yugoslavia but now with several hit films under his belt he had the clout to make the his horror comedy happen

American tourists David (David Naughton) and Jack (Griffin Dunne) are savaged by an unidentified vicious animal whilst hiking on the Yorkshire Moors. David awakes in a London hospital to find his friend dead and his life in disarray. Retiring to the home of a beautiful nurse (Jenny Agutter – ‘Walkabout’) to recuperate, he soon experiences disturbing changes to his mind and body, undergoing a full-moon transformation that will unleash terror on the streets of the capital… 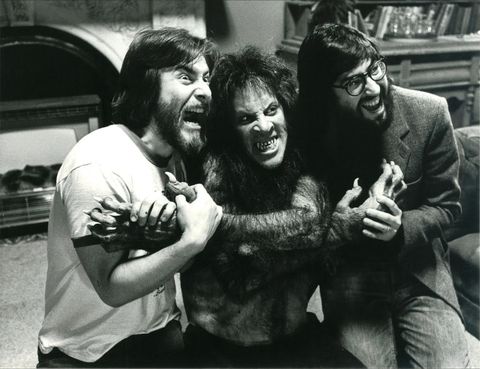 What was central to the film’s success was the transformation scene (we took a look behind the scenes HERE) . There was to be none of the usual tropes of the werewolf film where the actor would drop out of sight to reappear with a bit more hair hastily pasted to his face or the using the dissolve in the edit to mix between the actor getting ever more hirsute. This was to happen in real time in front of your eyes and Landis having seen Rick Baker’s ‘change-o-heads’ decided that the make up maestro was right man for the job. Unfortunately whilst Landis struggled to get the finance and persuade the studio to let him make the film left Baker to be poached to work on The Howling.  Landis went into overdrive to get him back on board his project and Baker gave The Howling project to his protégé Rob Bottin, who himself who go on to provide the equally jaw dropping make up effects in John Carpenter’s  remake of The Thing

The pivotal scene where Naughton changed in front of your eyes was (and remains) astonishing. Nothing like it had been seen before. Baker’s effects were truly ground breaking leaving audiences open mouthed at what they were seeing made all the more impressive that this was an era long before CGI ruined everything. So ahead of its time were the effects that the Academy Awards introduced a new category that of Best Make Up directly because of Bakers work on the film. That there was only one other nominee in the category (Stan Winston – Heartbeeps) was an indication that his work stood head and shoulders above anything else around at the time and Baker would win his first of seven Oscars for his work on the film before retiring in 2015.

An American Werewolf in London did decent box office earning over $30m (The Howling would go on to earn $17m) and established Landis as an A-list director for much of the 1980’s (he would go on to hit box office gold directing Eddie Murphy in Trading Places before tragedy beset his segment of the Twilight Zone anthology film in 1983). Landis had re-invented the comedy horror film which had been around with the likes of Abbott & Costello meet various Universal monsters a la Frankenstein, the Mummy etc but American Werewolf, despite its laughs, took its horror seriously and remains one of the defining films of the early eighties. There’s a load to enjoy in the film from Griffin Dunne’s increasingly decaying appearance, the inept police officers investigating the deaths, the sex appeal of Jenny Agutter, an hilariously bad spoof porn film within a film and spotting cameos by the then unknown Rik Mayall as a local in a Northern pub, Landis himself being thrown through a plate glass window – and keep an eye out too for Brick Top from Snatch as a black cab driver.

Landis got the comedy horror balance absolutely spot on in a notoriously tricky genre to get right as has been seen so many times since with films that have followed in its footsteps. Timeless in its appeal An American Werewolf in London can be watched time and again and has remained a favourite ever since its release and this Limited Edition UHD blu-ray is absolutely packed with bonus features making it an absolute must for fans of the film as well as anyone coming to it with fresh eyes. 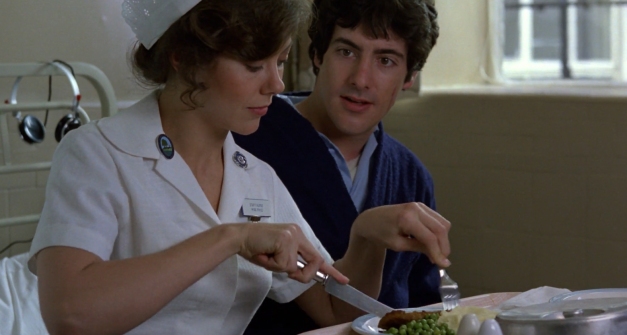 It’s the features with Landis still as excited and enthusiastic about the movie as ever and also Rick Baker who talks in detail about THAT scene plus other effects that make this an essential disc to own.