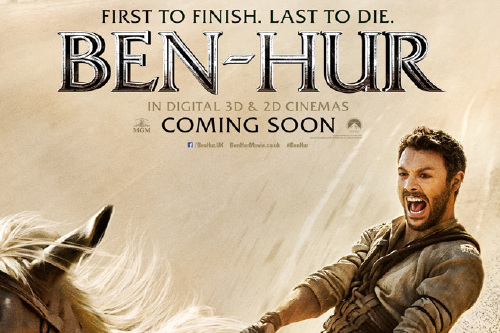 The ongoing saga of classic films being remade continues with this summers ‘Ben Hur’ which is a remake of the 1959 remake of the 1925 original – it all gets very confusing but anyway here’s the latest trailer which will also be in 3D.

Directed by Timor Bekmambetov who has concocted some utterly insane sequences in his previous films especially, ‘Wanted’. This features Morgan Freeman (who seems to be a rastafarian in this) and Jack Huston who plays Judah Ben-Hur, a prince falsely accused of treason by his adopted brother Messala (Toby Kebbell), an officer in the Roman army. Stripped of his title, separated from his family and his wife (Nazanin Boniadi), Judah is forced into slavery and having spent years at sea rowing a big boat, Judah returns to his homeland to seek revenge but instead finds redemption….. and everyone lived happily after…. possibly.

We’re not too sure about the trailer with its MoR soft rock soundtrack accompanying the biblical images and lines like, ‘Are we having fun, brother?’ seem a little too modern. But we love Toby Kebell and it’ll be interesting to see how mad the chariot race will be.

So here’s the trailer…..