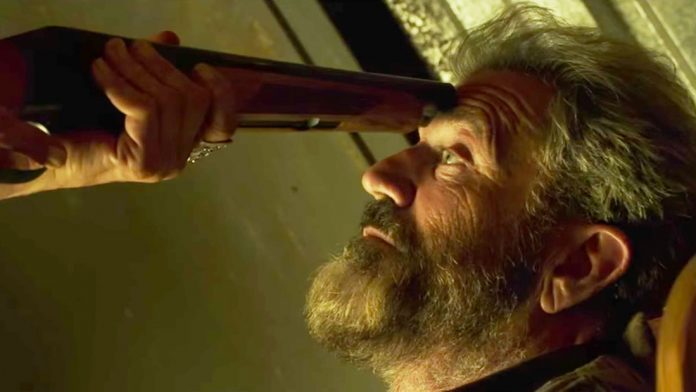 Mel Gibson’s public meltdowns are pretty well publicised and it prevented him from getting cast in some decent roles with his last film of any note being 2010’s ‘Edge of Darkness’. Since then he’s been in Jodie Foster’s ‘Beaver ‘ (‘Stop it!’- Ed) and chewed the scenery like his life depended on it in ‘Machete Kills’ and ‘The Expendables 3’.  His latest , ‘Blood Father’ is a return to the hard man action roles he played so well in Payback and the lethal weapon franchise and its great to see him in a role he inhabits so well this time as a divorced recovering alcoholic ex –con living in a battered trailer park where he works as a tattoo artist.

It’s opens with a sly dig at US gun culture when his missing daughter Lydia (Erin Moriarty) buys boxes galore of 9mm bullets at a supermarket but is not allowed to buy any cigarettes. It’s a scene typical of the script as the film progresses that  there are great little throwaway vignettes  which has a dig at other aspects of US culture including a moment in a truck of Mexican immigrants that undercuts the argument for immigrants ‘taking our jobs’. But that’s later because it soon launches into a rather intense house siege which all ends very messily and Lydia finds herself on the run for her life from the group of Mexican villains she’s found herself embroiled with and typical of single parent children who’ve not kept in touch with their other parent and now that she wants something she reaches out for her father for help for the first time to which he obviously rushes to her aid. It’s not long before the gang track her down at the trailer park in thrilling scene which brings back memories of the first Lethal Weapon film and the father and daughter are forced into going on the run in what now is a  road movie.

Based on the book by Peter Craig who also co writes the screenplay this is a briskly paced thriller directed by Jean Farncois Richet whose previous films include the remake of ‘Assault on Precinct 13’ as well as ‘Mesrine’ Part 1 & 2 and he handles the action with lean efficiency. Despite Gibson’s private life being so public it is always good to see him back as he’s always been such a great screen presence able to take in action, comedy or serious roles all with aplomb and his return to directing in the soon to be released ‘Hacksaw Ridge’ should see some sort of rehabilitation for him.  As the F-bomb father he’s a protecting angel to his sweary-mary daughter played by Erin Moriarty who appeared in the recent ‘Captain Fantastic’ and proves to be something of a chip of the old block when it comes to profanity. It’s good also to see a return of William H Macy as Gibson’s neighbour and parole sponsor try to keep him , and failing, on the straight and narrow. We’ve not seen him in anything decent for a while and in fairness he is wasted in the supporting role here.

With Gibson’s proclivity for being outspoken about certain race issues it seems odd that this is his second film after ‘Get the Gringo’ (which he also wrote and also features villainous Mexicans) that he’d steer clear of ethnic stereotypes but nonetheless this is a decent B movie with the father/daughter relationship at its core with a bittersweet ending that’s worth a look.