Now despite Colin Farrell doing some stuff for our You Tube channel HERE and HERE he’s back to proper films and his buddies from In Bruges re-team for a new film. Now ‘In Bruges’ was made all the way back in 2008 and co-starred Brendan Gleeson and was directed by writer director Martin McDonagh in a remarkably violent and profane film about two hit men hiding out in the Belgium city.

Since then McDonagh went on to write and direct the Oscar nominated,  “Three Billboards Outside of Ebbing Missouri” and now three years later McDonagh is set to return with Farrell and Gleeson for an In Bruges re-team.  With Searchlight Pictures and Film4 behind them the film is to be titled  “The Banshees of Inisheer” where the In Bruges re-team sees two friends living on a remote Irish isle. Their relationship however is turned upside down when one abruptly ends their friendship after an impasse, which results in some truly alarming circumstances for both of the men. 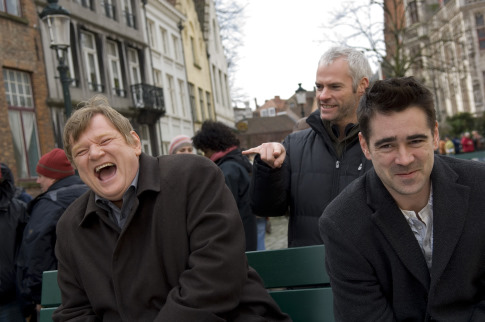 The Banshees of Inisheer is a film adaptation based on the only play of the seven that Martin McDonagh wrote very early on in his career but was on that he ended up never staging. The Banshees of Inisheer is only the fourth feature film McDonagh has directed after his debut short film Six Shooter in 2004 (which is on the In Bruges Blu ray as a bonus feature). This latest film from the In Bruges re-team, is to be shot for an extremely modest  $20 million budget and the feature film will begin shooting this Summer for a 2021 release.

Until then Farrell is currently filming on the latest Batman film as The Penguin and were looking forward to the first stills appearing of him in character for that because Danny DeVito was superb when he played the role in Batman Returns.